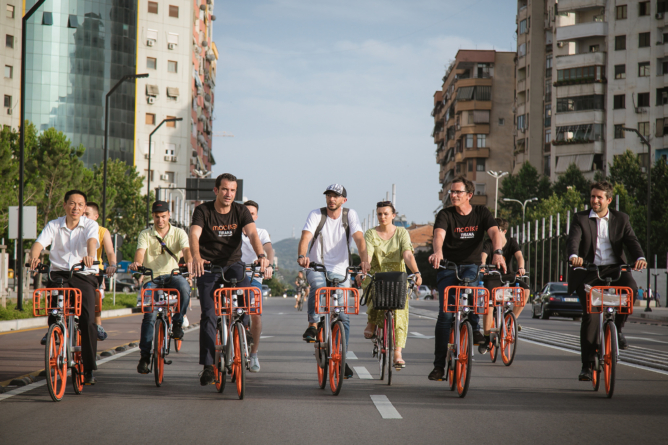 From today, Tirana becomes the first city in the Balkans to bring the bicycle system “Smart Bike Share”, an ecological and innovative way to move to the city. Every citizen can use the bicycle after downloading the “Mobike” application on his phone making it an inseparable part of the movement around Tirana revolutionizing the culture of bicycle movement in the city. At launching of the first 500 bicycles on the streets of the capital took part, the Mayor of Tirana, Erion Veliaj, representatives of Mobike and representatives of the Italian and Chinese Embassies in our country. Mayor Veliaj expressed his conviction that this summer will enter history in the city of Tirana together with 4,000 pedaling as the only way to bring Tirana in the right direction.

“Only three years have passed, not only Tirana is the cleanest city, but we are still the first in the Balkans, starting from bicycles, electric taxis and many other innovations that make our Tirana no. 1. Today if you travel to Florence, if you travel to Milan and if you travel to Tirana maybe there is not much in common, but Mobike is the same everywhere. We have a piece of Europe starting from this bicycle project without a station that today launches with the first 500 melodies in our beloved city, in the city of Tirana. This will be a safe summer that will enter history in the city of Tirana and I also look forward to doing this story together with 4,000 pedalos as the only way to bring Tirana in the right direction as we did in these three years and as we will do next, “Veliaj said. He expressed the conviction that Tirana will soon arrive to have more bicycle users than drivers.

The head of the municipality stated that mobile bicycles offer a transparent and simple payment process, making them accessible to everyone. “As we make a lot of online payments starting from the sms parking lot, this system is a complete transparent system made by everybody’s mobile. Just lets download the Mobike application, fill out your data and at a cost that is cheaper than a bus ticket you can become a Mobike user. The system does not require a station, get where you find on the map the nearest bicycle and then leave it where you are finished, “said Veliaj.

Meanwhile for students starting next month there will be special packages and special points in the schools or university areas. “For all those who are students, for all those who are high school students starting next month we will also have packages targeting their age group and having as frequent points the areas where the schools are and the areas where the universities are,” he said.

Along with the arrival of 4,000 bicycles in Tirana, which are expected to completely transform transport culture into the capital, the Municipality of Tirana is also working intensively for the construction of the minimal bicycle network in the capital, as a way to guarantee the life of all pedalers.

Veliaj also demanded the co-operation of vehicle drivers to respect the citizens who choose to travel to the capital through bicycles. “I appeal to all drivers, to be carefully while you take the turn to see if there is any cyclist or pedestrian, and I believe that a democratic city is a city that gives the same space to all taxpayers even to those who are standing and those who are on two wheels and those in the car. This is the democratic city where we believe and I believe that with Mobike the city has become even more democratic than it was, “said Veliaj.

While pointing out that the first tests on the streets of the capital with Mobike have proved successful, Veliaj stressed that new bicycles without a station are equipped with all the security elements that guarantee their non-robbery. “All bicycles have a GPS, so we know exactly where the bicycle is, because it comes out on the map and we know who the last user was. So for anyone who thinks stealing your bike, do not try it out. We know who you are and we know exactly where the bike is. The fact that we did not have a courageous guy in the first week is a good thing, which means that the system is working. Not only that, but the system has a kind of electronic fence. It means when you leave the map of Tirana, so switch to Kamza Street or switch to the Kombinat, or crossing the periphery of Tirana lights up an alarm that you insane so you see everyone who has taken the bike and is leaving home, “he clarified.

Director of “Mobike” Massimiliano Rubin thanked the Municipality of Tirana for the cooperation and support of this innovative project. “What I’m living bringing here with the help of Tirana Municipality is the vitality of this project to bring something very innovative, a project that is born in China, goes through Italy and comes to Albania. And since the first week I was amazed at how people reacted, “Massimiliano Rubin said.

Activist Ened Mato will follow the performance of the “Bike Share” system in Tirana, now the Bicycle Mayor. He considered this day as historic for the city of Tirana, which will have a positive impact on the quality of air. “This is the Orange Revolution. I want to thank anyone who pedaled, whoever believed, whoever has the energy of this city. This is a historic day for Tirana because a bicycle army will be on the streets of Tirana for the city to have fresh air. I wish this city to be full of bicycle lover. Tirana already has a vision and thanks to the mayor this vision is becoming reality, “said Mato.

To use bicycles without a station, you need to download the “Mobike” application on your mobile phone. Sign up with your phone number and select the nearest bicycle map. Then, by phone, do the “barcode” scanning of the bike and from that moment you can use it in the city of Tirana. After finishing your trip, just close it with the key on the rear wheel and park it in a safe, secure place.