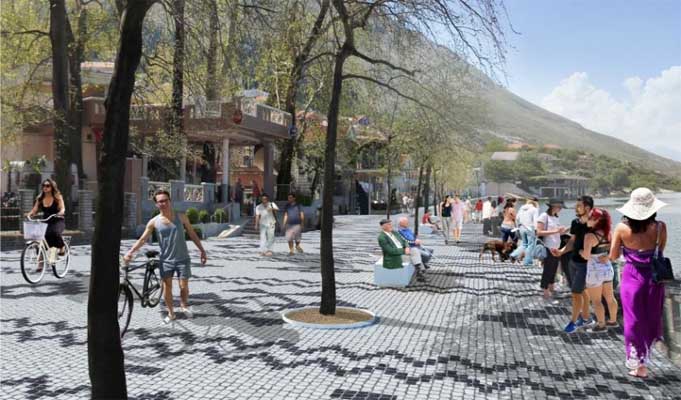 In Shiroka Square, work on preparation of the structure and underground network is ongoing.

This process will be followed by the stage laying with tiles, whose mosaics are inspired by popular motifs.

In parallel with the works on the square, work is being done on the structure of the lake platform and the picnic area. Special space will also have the parking area.

The project for the reconstruction of Shiroka Square foresees the treatment of a space of:

Other details, to create a comfortable space for citizens will include:

The reconstruction of Shiroka Square is an investment that is expected in the future to be integrated with the project “On Reconstruction of the West Bank of Shkodra Lake”. Currently, the lake area does not maximize its potential. The entrance area to Shiroka and Zogaj village has been out of town.

It is characterized by poor transport and traffic infrastructure, demolished or degraded houses under construction, while the shore of the lake in certain areas appears defective and polluted.

The project aims to turn Shiroka into an important entertainment, culture and tourism center by promoting activities in and around the lake and reviving history and traditions without affecting the natural character of the area.