A foreign direct investment (FDI) is an investment in the form of a controlling ownership in a business in one country by an entity based in another country.  It is thus distinguished from a foreign portfolio investment by a notion of direct control. The origin of the investment does not impact the definition of an FDI; the investment may be made either “inorganically” by buying a company in the target country or “organically” by starting or expanding the operations of a business in that country.

The latest Bank of Albania data show that at the end of year 2017, the accumulated (over the years) stock of FDI-s in the country reached a record level – 6.5 billion Euros. This level represents a 67% increase compared to the end of year 2012 (Figure 1). The main source of the increase in the last two years has been the Trans Adriatic Pipeline (TAP) and investments by Royal Dutch Shell.

At the end of 2017, Greece remained the main country of origin for the FDI stock in Albania with 19.6% (Figure2), followed by Switzerland and Canada with 13.6% each (Switzerland due to TAP and Canada due to Bankers Petroleum).

At the end of 2014, Italy was ranked third as country of origin for FDI stock in Albania. However, due to TAP and investments from Royal Dutch Shell, Switzerland and Holland have moved Italy to the fifth place (Table 1). 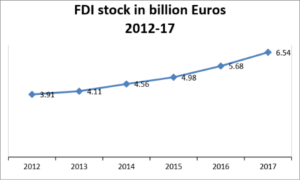