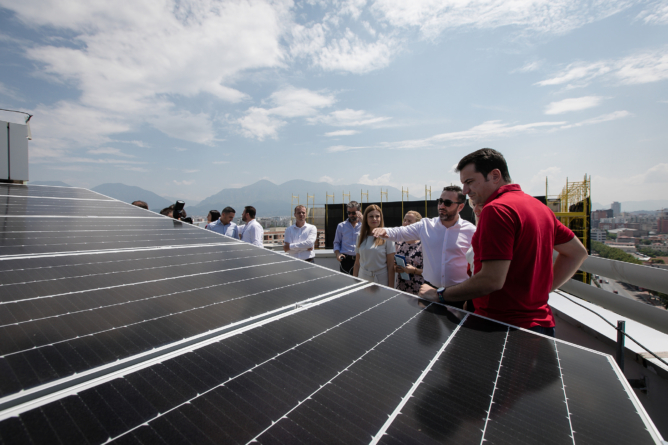 Tirana is launching a new era in the use of clean energy. Behind the green terraces in some of the public institutions, the project has been implemented in the capital for photovoltaic panels, which not only produce clean energy, but at the same time reduce costs.

“This is something new in Tirana. ProCredit Bank starts the first energy recovery, using solar panels, to save a large part of the energy it spends. Can a terrace change Tirana’s climate? Absolutely not, but at least, this investment equals 350 trees and saves 15 tonnes of carbon dioxide. Imagine what climate Tirana would like each of the 5000 Tirana terraces to add 300 trees and save 15 tonnes of carbon dioxide in the air, “Veliaj said.

He stressed that the Municipality of Tirana is considering the possibility of implementing the project of solar panel plants and in many of the terraces or public areas to benefit clean energy. “Today we have a first swirling of something that can turn into a revolution for Tirana. We are considering that in other areas of the city, the Municipality is actively involved, either with the square “Skenderbej”, with some of the public terraces, as we did with the green terrace of the Municipality, either with Lake Boville, for also there to be implemented what are called floating panels; therefore, using the terraces, water areas, such as lakes, which are ideal places where we can get clean energy, without having more space in the territory, “Veliaj said.

Calling it the best way to provide energy, mayor Veliaj called for this example to be followed not only by state institutions, but also by businesses and family. “I look forward to the fact that as many citizens or institutions copied the municipality with green terraces, they copied the bank to have solar terraces. Today costs have fallen, both for institutions, both for businesses and for families, is the best way to secure a large part of the energy from the solar one, “Veliaj said.

The energy produced by the photovoltaic system is estimated to be around 25,500 kWh / year and brings CO2 reductions to around 15.4 tons per year. Adela Leka, General Manager of ProCredit Bank, said: “We are happy that ProCredit Bank Albania is the first financial institution to undertake this initiative by showing our commitment to environmental protection. These investments not only affect the efficiency of our bank, but also the promotion of these investments in the community that surrounds us. Apart from the direct advantages, such as reducing the negative impact on the environment, diversifying energy resources, and increasing efficiency, we aim to give a positive example to our customers and partners.

Elton Çekrezi, General Manager of EuroElektra, a project and implementation company for the photovoltaic project, said: “For 2018, Albania is the second behind Sweden in Europe that has brought the panels with the most efficient technology in the global photovoltaic energy market and personally I think it is a good start in a modestly developed sector, but having many real potential development in the near future. We are confident that photovoltaic projects of this kind will be realized more consistently, considering the high potential of solar energy utilization in our country, almost 40% more than Germany, the rapid return on investment and the zero impact that the use of which technology has in the environment “. 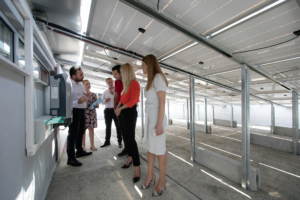 Such investments significantly reduce the electricity bill for households and businesses that will install solar panels, as they can now become energy producers by providing electricity for their own consumption at much cheaper cost than the public network by utilizing energy renewable.