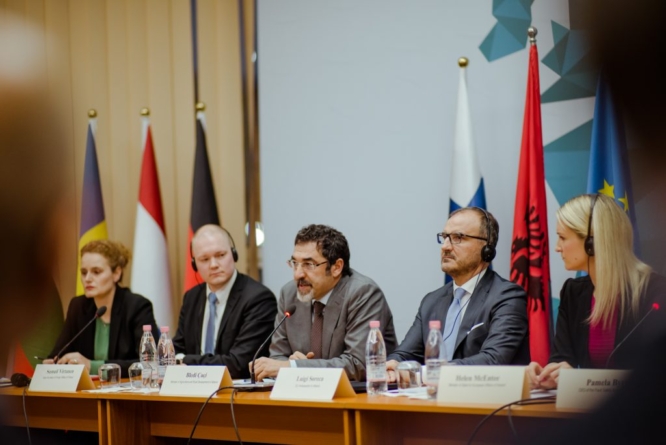 Introduced the launch of a new cooperation between Albania and the European Union in the field of food safety. “Support for food safety, veterinary and phytosanitary standards” . This is the program worth about 5 million euros to be implemented for a 4-year period. The Food Safety Authority in Ireland and its Finnish counterparts will assist the Albanian government to implement policies and take concrete actions based on our national targets as well as on the European Union’s Safe Food Policy.

An element that distinguishes this project is particularly consumer involvement in trying to increase food chain security. The EU Ambassador in Albania, Mr. Luigi Soreca, Minister of Agriculture and Rural Development, Mr. Bledi Çuçi and other European officials attended the meeting and the press conference that was held today. During his speech Minister Çuçi spoke about the reshuffle of the National Food Authority. According to him, through a new partnership with the EU, the AKU will become an institution that will function as an Intelligence Unit. (Intelligence Unit)

“We, as the Minister of Agriculture and the Government as a whole, are determined to create consolidated structures covering issues related to safe food, veterinary and plant protection. We also have the readiness to gradually integrate Albanian legislation with European Union regulations. We are working on a new Veterinary Service law.  The new organization we will make to this service aims to turn functional and operational, both in vertical and horizontal command structures. Through the new law and the implementation of this project, I believe we will finally have a better veterinary service in every area of ​​the country, ”  said Minister Çuçi.

The full traceability of all chains of food chains is a priority task of the Ministry of Agriculture and its subordinate institutions, where the focus is on the AKU and the Veterinary Service. Regarding the traceability of the food chain, we intend to follow the same approach applied by EU countries under the motto ‘From farm to table’.