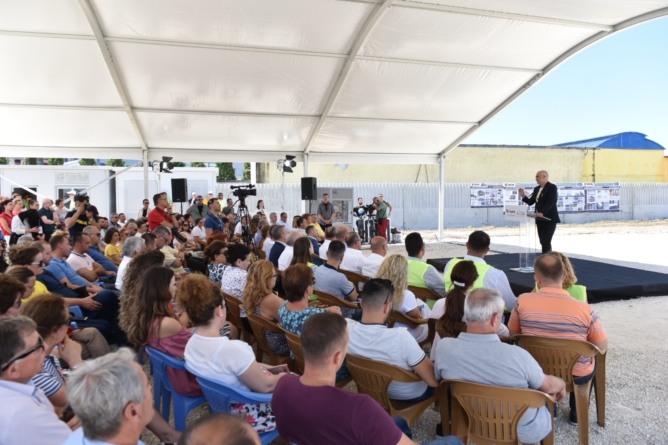 At the inauguration ceremony of the start-up of the South Korean company “Yura Corporation” in Albania, in the automotive sector, for the production of technological parts of automobiles, were attended the Prime Minister, Mr. Edi Rama, and the Minister of Finance and Economy, Anila Denaj. Also present were the Director of AIDA, Sokol Nano, and the mayor of Fier, Armando Subashi.

Minister Denaj expressed her satisfaction with the investment that the company will realize in our country, which in both its phases will reach 13 million euros, will employ about 1100 employees and will invest in nearly 4.9 hectares of land in the area and Fier.

The minister assessed that Albania’s labor force, competitive costs and geographic position are some of the elements that attracted the company’s attention to investing in our country and expressed the conviction that other foreign investors will choose Albania to invest, just like the company ” Yura Corporation “.

The minister also mentioned some of the sectors of interest to foreign investors, such as elite tourism, renewable energy, business process transfer or the automotive sector, where the South Korean company is investing.

Also, Minister Denaj brought to attention the positive figures of foreign direct investment in our country during 2018, which amounted to over 1 billion euros or 13.5% more than the year 2017, placing Albania in second place in the Balkans Western countries in terms of FDI growth rate, almost 7.5% of Gross Domestic Product. FDI positive figures were also recorded in the first quarter of 2019, up 285 million euros in investments and up compared to the same quarter of the previous year.