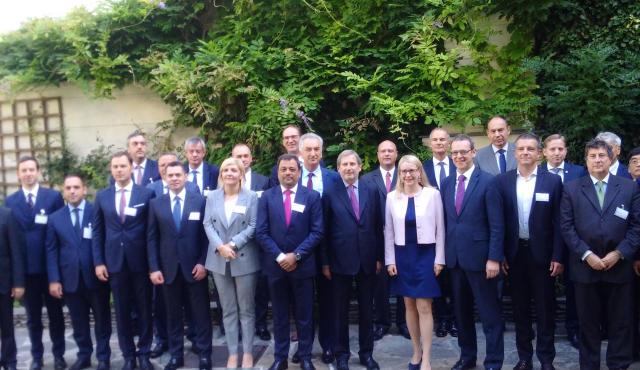 Minister of Finance and Economy Arben Ahmetaj attended today the meeting of the Ministers of Economy of the Western Balkan countries, meeting held every year in July, within the framework of the Berlin Process. Participant was also Commissioner Johannes Hahn.

The focus of the meeting was to present the achievements in three main directions: Promoting Investment and Trade in the Western Balkans; Regional Economic Integration with the advancement of the MAP Regional Economic Region REA project and Increased Access to Finance for Small and Medium Enterprises and Start-ups, in line with the objectives set at previous summits (Western Balkans Investment Summit held in London and the Skopje Digital Summit).

The meeting was chaired by the United Kingdom and Austria, and the date of the meeting coincides with the start of the Austrian Presidency of the Council of the European Union, which will have as a priority a credible extension for the Western Balkans.

Smart growth in the Western Balkans

The Summit participants discussed the need to address the digital skills gap so that the workforce would be able to respond to the challenge of digital transformation.

Improved governance and transparency; promoting innovation, productivity and competitiveness; opening up new markets and generating further employment opportunities; strengthening of vocational education and training; promoting social inclusion and raising the level of well-being of citizens were considered as the main advantages of digitalisation.

The countries agreed that the European Union’s Digital Education Education Action Plan, adopted in January 2018, as well as the recommendations of the OECD report (South East Europe Competitiveness Outlook 2018), could serve as an important basis for developing national skills strategies digital, including programs to reduce the gender gap and increase employability.

In this context, support was sought for holding the 2019 Digital Summit in Serbia, to be co-organized by the European Commission, RCC and business representatives.

The Vienna Summit acknowledged the progress made in implementing the Multi-annual Action Plan for the Regional Economic Zone (MAP REA) and the priority areas for the period 2018-2019, highlighted by the Regional Cooperation Council (RCC) and the CEFTA Secretariat under the four main pillars.

Participating countries in the meeting confirmed the transformative potential of the Regional Economic Zone (REA), recognizing the importance of regional integration.

Likewise, the approval of the Regional Reform Investment Agenda (RIRA) and the launch of the online investment platform, which represents the region as a single investment destination, was assessed.

Support to the private sector and SMEs in the Western Balkans

One of the issues raised by participating countries at the Vienna Summit is the limited ability of local equity markets to finance SMEs. Bank lending dominates the credit market, while alternative funding sources remain scarce.

Participating countries discussed various proposals for increasing financial support for SMEs and Start-ups by combining a number of instruments: deepening existing support funds; the combination of ongoing technical assistance programs for non-bank financial institutions and the extension of the legal framework needed for such funding as well as the improvement of education, advisory and awareness programs to address SME deficiencies.

At the same time, the European Commission announced a new guarantee instrument, which will be created under the Western Balkans Investment Framework and will be launched in early 2019.

The initial EU commitment of up to € 150 million in 2019-2020 will aim to increase the investment of up to € 1 billion to contribute to sustainable socio-economic development and regional integration.