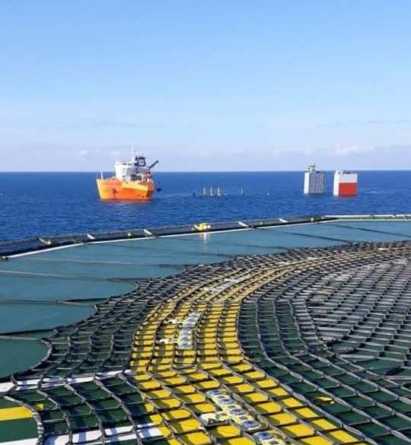 On the first day of 2019, in the early hours of the morning, the port of Durrës was run by the Mimar Sinan and DN106 shipwreck operations by Sun Shine.

The Marine Directorate General says these tools will be used for the TAP pipeline assembly.

The operation ended successfully thanks to the maximal engagement of all involved companies and the Port of Capri of Durres.

In the framework of laying pipeline pipeline TAP in the maritime space between Albania and Italy, in the last days of December was held a coordinating meeting at the Port of Port of Durres, between contractors, TAP project supervisors and local authorities regarding the arrival of Dockwise White Marlin, a floating dock, who will carry the Castoro 10 mounting ship.

Ship Castoro 10, used for the first stage of laying pipes at sea.

This discharge operation is undertaken for the first time in the port of Durres port and consists of diving into the depth of 25 meters of the floating dock and the issuing of the loaded vessel.