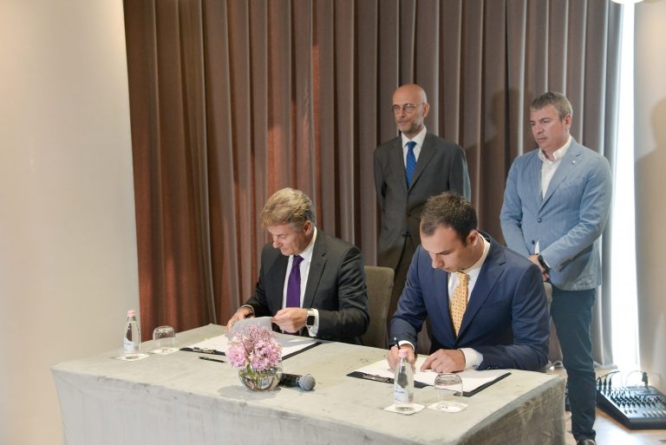 The Albanian state gas company Albgaz and the Italian company SNAM signed in Tirana the agreement establishing a joint venture that will aim at maintaining the pipeline of the TAP pipeline for the part that passes into the territory of Albania.

The stock structure is divided into Albgaz 75% and SNAM 25%. The Italian company SNAM guarantees the qualification of Joint Venture employees and the transfer of technological knowledge according to sector standards, but in particular to TAP. During the negotiation process, the Albanian government was assisted by Roland Berger’s consultants thanks to the financial support provided by the Swiss Confederation’s government through SECO with the aim of providing technical assistance to increase the capacity of gas infrastructure in Albania.

“This agreement came after a very intensive negotiation, following an open and international procedure among the best European companies that expressed the interest of becoming a partner with Albanian Albgaz, demonstrating that the interest was very high. We selected merit as one of Italy’s largest SNAM companies, which is also a shareholder in the TAP consortium, “said Minister of Infrastructure and Energy Damian Gjiknuri.

Further, he clarified that Albgaz’s commitment to TAP’s maintenance was achieved thanks to the renegotiation of the deal in 2016.

“The TAP pipeline maintenance administration was not a right that belongs to Albania. Rather, it has been the insistence of this government and the good will of the consortium that we have to play one of the Albanian companies. For this reason, as we lacked the experience, we wanted to have an international partner. We are happy to have solved SNAM in Italy and now we are entering a new service in Albania. So an Albanian company with the Italian company but in the prospect of all this knowledge and knowledge will be transferred to the Albanian company will be able to offer a well-known international service “, Gjiknuri insisted.

“As ambassador of Italy, I am very pleased to sign today for this joint company. A long job done these days by SNAM and Albgaz to come to this signing. I think when TAP’s decision was taken, Albania had a choice before it would allow simply passing this tube through the country or making it possible to turn this pipeline into a source of economy and development. I think that in the months and years ahead, cooperation with SNAM will work and it will be possible to develop the gas sector in Albania with Italian help, “said Cutillo.

Director of Albgaz Arber Avrami gave some details about the operation of the joint venture established with the prestigious company SNAM.

“Joint Venture anticipates to employ in the initial phase 45-60 employees, all qualified in the assets of SNAM in Italy and subsequently in TAP’s own assets in Albania starting from July 2018 until July 2019. So the activity is expected to start immediately after three or four weeks. The initial volume of services is expected to be initially 4-6 million euros per year. Depending on the maintenance needs that are envisaged under a rigorous monitoring program or the investment of other TSO pipelines in Albania, such as IAP or ALKOGAP, the company expects to increase the volume of services in operation and maintenance at least 10-15 million euros year, “Avrami underlined.

SNAM is one of the most important European natural gas operators. SNAM’s assets are over 41,000 kilometers of natural gas transmission pipelines, of which 33,000 in Italy and around 8,000 in 7 other countries outside Italy. SNAM’s annual turnover is of the order of 2.5 billion euros with a market capitalization of a company capitalized on a stock exchange of 13 billion euros.

The joint venture created by Albgaz and SNAM has already started negotiations with TAP for the contract / agreement on operational and maintenance services. Within 2019 the recruitment of employees and their training in Italy and Albania is expected to be completed. The maintenance activity will begin after basic training, mainly during 2019. After 2020, when TAP’s operation is expected, the joint venture will provide the entire spectrum of services in question.