Minister of Finance and Economy, Arben Ahmetaj, interviewed small businesses in Shkodra, where he emphasized that “on the initiative of the Prime Minister, next week there will be two important fiscal assessments, one for the electricity industry for photovoltaics, where VAT for machinery and equipment becomes 0, and another for agricultural cooperative societies, where through a fiscal and procedural instrument will be treated an agricultural enterprise as a farmer without VAT burden. ”

Focusing on information and communication on lowering the VAT threshold, the minister once again stressed the fact that “there will be no fines for small business, wrong declaration, no administrative costs, no price increase, and we will continue to keep the reduced taxes and 0 for the small business “.

Ahmetaj said that citizens and businesses will soon understand that the government has done the right thing together and in favor of small entrepreneurship and these procedures are a tax and economic normality and it is not about a new tax. 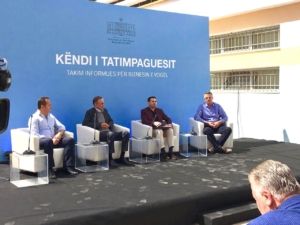 “Today we are about two weeks after the declaration obligation has come into force and the fact that there is no change in prices is in full reference to the belief of what we have said months and months that there will be no change and price increase. Beyond that, the declaration is not a tax, but it is a procedure, “said the Minister.

Ahmetaj clarified that VAT is a tax set in ’96 at 20% and has never changed. There are 9975 businesses across Albania that will enter the declaration scheme, while in Shkodra there are 447 such that a simplified statement will be applied once in three months without any additional cost for business, have opportunities for lending.

“Have we discussed whether it will cost? The discussion has begun to “we will be an accountant and we will pay”, and so on. Zero cost! I am even telling you that, based on the procedure that is so simplified, it will simply be the addition of four boxes. Tell me a small venture, no matter how simple it is, do not know what’s in inventory?

Ahmetaj said that the purpose of this change is not collecting revenues from small business, but the government’s focus remains the big business.

“In the total amount of VAT we collect, 99.2% comes from the big business, 99.2%. Only a small part (0.08%) comes from the small business of 5 to 8 million Lek turnover. How do you think we are doing a procedure to focus those unusually large and not so many resources we have on businesses that do not have what to give because of the logic and nature of the transaction or focus on big business which gives 99.2% of the total VAT.

‘”I brought this to overthrow that emotional, or ignorant, or deliberate argument that the opposition brings in its vast protests. Our focus is the big business and will continue to be the big business. “

Ahmetaj commented on the protests organized by the opposition.

“Personally, I followed that day, demolishing the shutter, and thank all citizens, small entrepreneurs who refused to politicize their concern and continued their work. I thank them on behalf of all taxpayers because they have understood correctly that even where there is concern, the concern is not solved by political, ignorance or intentional solicitude but resolved in discussion with the government. “

In closing, Ahmetaj said that next week is a very important moment for the country and the aspiration of every Albanian citizen and entrepreneur.

“I want to refer to April 17, an important day for the aspiration of every citizen, employed, entrepreneur, administration, school, student, young, young, old, all Albanians, on the left wing , on the right wing, is a dream over the years to become part of Europe. Part of Europe is becoming a dignified citizen, paying taxes, being responsible and it is our duty, the duty of the government to facilitate daily and more procedures, to ease the fiscal burden on a daily basis and to make it possible through its policies that society, economy and entrepreneurship create more and more jobs.