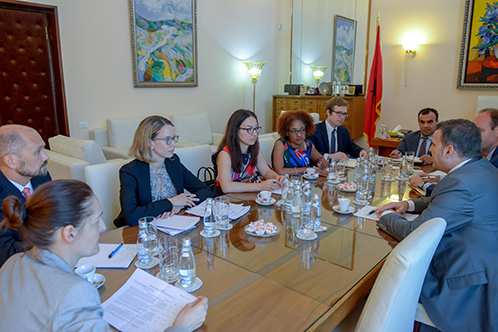 On 19 June 2019, the Governor of the Bank of Albania, Gent Sejko, held a meeting with the World Bank Mission, which is visiting Albania in support of Macro-fiscal Policies. This Mission consists of Mrs. Maryam Salim, Permanent Representative of the World Bank Office (BB) in Albania, Gallina Andronova Vincelette, Manager at the World Bank for Europe and the Region, Johanna Jaeger, Chief Financial Officer and other WB representatives.

During the meeting, representatives of the World Bank Mission focused on fiscal policy discussions within the budget support program as well as the financial system development.

Regarding fiscal matters, the Mission stressed the need to increase transparency and fiscal responsibility as important elements for increasing the sustainability of the country’s public finances.

Regarding the further development of the financial system, the Mission emphasized the willingness of the World Bank to continue to contribute to the full implementation of the national program for the reduction of non-performing loans and the further improvement of the payment system. They also put forward the possibility of agreeing joint programs in the future, which would enable further improvement of the lending environment.

On his part, Governor Sejko emphasized that the Bank of Albania has supported and continues to support fiscal consolidation as a process that helps increase the country’s economic and financial sustainability. He also stressed the positive role that co-ordination of monetary and fiscal policies has on increasing efficiency and creating preconditions for the country’s sustainable and long-term development. The Governor expressed the support of the Bank of Albania for initiatives aimed at increasing the formalization of the Albanian economy and strengthening the health of public finances, underlining the contribution that the Bank of Albania has provided and will deliver in this area.

Further, the Governor acquainted the participants with the main challenges facing the Bank of Albania today, one of which is the encouragement of lending. Boosting credit has been at the Bank of Albania’s constant attention to the importance it has on the country’s sustainable financial development. Lastly, the Bank of Albania has also organized a special meeting with the heads of the banking sector in order to adopt a common development philosophy and to develop a concrete plan of measures for improving the quantity and quality of lending as well as expanding the range of products financial sector of this sector.

Regarding the financial sector development programs, Governor Sejko recognized the World Bank’s Mission with the concrete steps taken by the Bank of Albania during the last year. In particular, he stressed that the bill “On payment services” drafted with the World Bank technical assistance has been submitted to the Assembly and that the work for drafting a bill on payment account that transposes the relevant European directive is ongoing. The adoption of these draft laws will help increase the degree of financial inclusion, stimulate the use of electronic payment instruments and contribute to lowering their cost. Governor Sejko acquainted WB representatives with Bank of Albania initiatives for completing the inter-institutional program for the reduction of non-performing loans,

In closing, the participants identified potential areas of future co-operation, such as improving collateral valuation regulations and possible World Bank programs in the interest of reducing credit risk in the country.

In closing, Governor Sejko praised the contribution of the World Bank to the development of the country in support of structural reforms and improvement of the functioning of institutions in Albania. The Governor stressed that this contribution has helped the Bank of Albania improve the specific areas of its activity and expressed the engagement of the institution that it directs for the continuation of successful cooperation in the future as well.