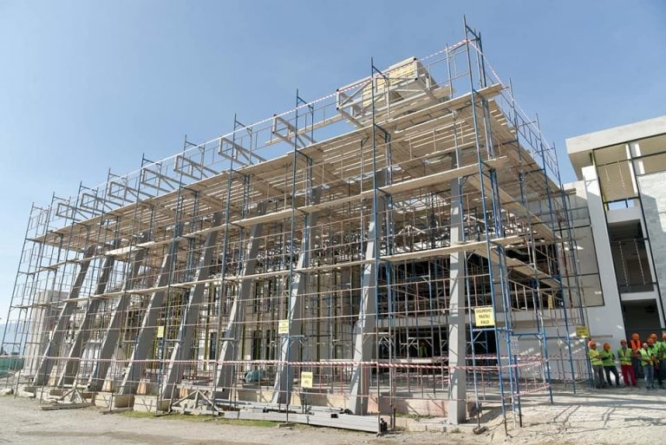 A 15m-euro investment, the largest ever realized in Vlora Port, will reshape the role and function of this important gateway to the tourist city. The project is tailored to the perspective and new profile of the harbor, anchoring and ferry processing. In addition to this major investment, the port is also investing in the expansion of the passenger terminal, worth about 213 million leks. The port structure has expanded and envisages the processing of 3-4 ferries at the same time, which is being realized through the reconstruction and extension of the western quay, the seafront advancement of the belt that merges the two existing quays, deepening the basin and extending the processing facilities by about 3 hectares .

Prime Minister Rama inspected the works at the port. Vlora Port Director Admir Malaj informed that the new terminal will be ready for passengers within two months, while over the extension of the quayside is already closed over 80% of the works. “The new terminal, with a total value of 212 million new leks, extends to an area of ​​2700 square meters. The old terminal was only 383 square meters and with few service environments. The entrance will be all with thermal glass façade. There will be an increase of the Border Police Post, which will have processing up to 3 thousand passengers. The premises are very qualitative. I believe next year, next season, along with the new project for the expansion of the fish will enable the access of as many citizens as possible. The terminal ends for 2 months, “said Malaj.

Prime Minister Rama stated that the port should serve tourism and integrate with Lungomare in order to be accessible to all citizens. “All the challenge now is to make the regulatory plan of the entire area back to a part of the city all this. The Harbor can not be isolated from the city. Then proceed to the next stage of Lungomare, on the other side. But here we must have a plan very soon to connect us to the Boulevard. This is the focal point now, “said Prime Minister Rama among others.

The Mayor of Vlora, Dritan Leli, said the urban plan has foreseen the arrangement of the entire area between the port and Lungomare. While Infrastructure Minister Damian Gjiknuri underlined that efforts are being made to introduce a new ferry line for which an Albanian company is ready to invest, thus giving a very positive impact to tourism in the country.

The existing terminal of Vlora Port with a surface of about 400 m2 does not meet even the necessary conditions for the number of passengers moving through this port. The terminal expansion project consists of increasing service quality, speed in operations and controls, and functional environments to withstand any movement period.