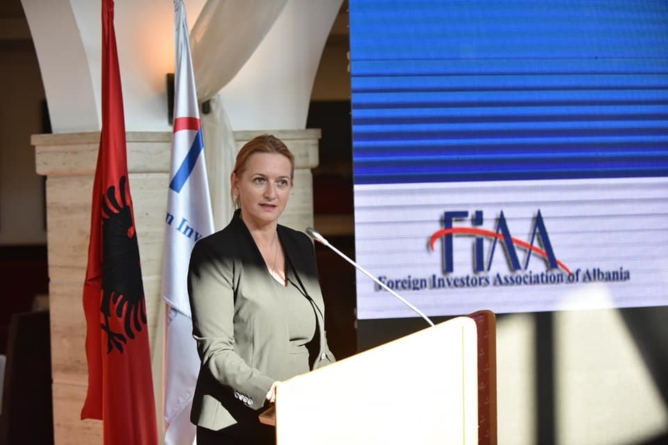 The Ministry of Finance and Economy, Anila Denaj, was present in the presentation of Survey Results for the 2019 Business Environment by the Foreign Investors Association (FIAA).

This survey was conducted with members of FIAA, important ventures in the country as banks, companies operating in the fields of industry, oil, telecommunications, energy, consulting, and so on.

Minister Denaj is familiar with the perception of FIAA members on the business climate in our country and their concerns in doing business.

The minister said that part of the perception of the observation is fair, as they affect the business climate and honest competition.

“Who is their concern mainly? It is for the rules of the game to be clear and informality to be reduced. That is our goal, so we found a good dialogue and a fruitful partnership between the two sides, in order to bring this project forward, “said Mrs. Denaj.

During her speech, the Minister of Finance and Economy said that reforms undertaken by the Albanian government for several years have yielded tangible results. As a result of deregulation reform today, 99% of licenses are issued online, while 37 licenses are being reviewed to be revoked, which is a great convenience and reduces bureaucracy for businesses.

Minister Denaj stopped further on the project of Fiscalis, launched this year by the Ministry of Finance and Economy. This project intends that by 2021 all payments will be made electronically, affecting the reduction of informality and a more friendly business environment.

“It is a project that the Ministry of Finance has launched this year and it is thought that in the 20 to 20 years all payments will be more electronically. This would significantly reduce the share of informality and make the system work in itself and without the intervention of individuals in the administration, who should somewhat be more friendly with the business, “said the Minister.

A special place in her speech The Minister also devoted the reform in vocational education and Labor offices, which today have a better link between them in view of increasing employment. The Minister invited foreign investors to visit Vocational Schools and Labor Offices in the areas where they operate, in order to have a better interaction between job-seekers and employers.