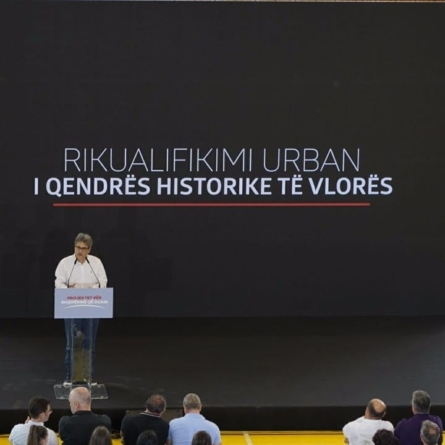 Major projects for Vlora that are expected to begin soon were presented at a public meeting on June 23, 2018, at the City’s Sports Palace.

Executive Director of the Albanian Development Fund, Benet Beci in the presentation of the project for the Reconstruction of the Historic Center of Vlora said that after the successive investments completed in Vlora as part of a well-planned plan and with a clear concept of regional development, now has the rehabilitation of the historic center.

“No European city lacks a historic center, and it is now the turn of this very important investment for the city of Vlora to capture the rapid pace of development,” said FZZ Executive Director Beci.

Vlora remains the clearest evidence of a planned transformation with a clear concept of regional development.

The interventions in Vlora in recent years have been undertaken on the basis of a well-planned plan.

This has made each of us – a citizen of Vlora or a tourist – to touch the power of transforming interventions over a clear concept from the very beginning.

Specifically, the Lungomare was accompanied by the interventions in the ring and the road “Dhimitër Konomi” to arrange traffic in the city and to give the area near the coast a modern space.

The Soda Forest, where infrastructure was completely lacking and sunk in the dark, with the construction of the road transformed into a modern park in function of citizens and tourists.

Project – The idea for the reconstruction of the boulevard “Ismail Qemali” was built in full coordination with Lungomare both from the approach and the design.

We have just completed the Kanina tourist route that will give new impetus to the development of agro-tourism and will create employment and prosperity for the 2,000 inhabitants of Kanin.

We are walking very well on the Vlora River Road, where in autumn we will complete the asphalting of the first 23 km of the village from Sherishte to Gjorm. Meanwhile, we are finishing the procedures and we soon start work for the other two segments from the Gjorm Bridge to Kuç.

All projects that have been realized and are being implemented in Vlora have a common concept and this is a new way of seeing urban development today – integrated, planned and implemented according to the best parameters.

Part of this premedicated mosaic is the rehabilitation of the historic center of Vlora we are presenting today. We know that no European tourist city lacks historic sites. And after the interventions in the industrial area and tourist areas of Vlora, the turn of this investment came.

Urban Retraining of the Historic Center of Vlora was timely planned to rearrange and revitalize an area that represents the heart of the city.

The situation in which there was no need for comment, as I believe we all know it was left completely neglected. Old buildings were almost all degraded and in some cases destroyed as a result of the chaotic development of the 1990s.

Project – The idea for the retraining of the historic center has been finalized thanks to the financing of the Albanian government. It is the result of a deep study and intensive consultations between representatives of central and local government such as the Ministry of Culture, the Institute of Monuments, the Municipality of Vlora and the funding partners.

The area still retains traces from the late Middle Ages when it began to be built. There are narrow streets, with characteristic 2-3-storey buildings. Some of them have historical significance since they were home to patriot offices and prominent national fighters. Although injured can be rehabilitated and returned to the city.

For the purpose of studying and designing the historical center is divided into two subsections: subsection A and subsection B.

The range of interventions during the first phase is very wide. The implementation project envisions the construction of the underground engineering network and the water supply network, as well as the complete reconstruction of roads and alleyways.

The area will be treated with 13 thousand square meters of squares and public spaces that will be laid with stone tiles and green. The reconstruction of the Clock Square, the square in front of the City Hall and other squares will give a breath and a whole new look of the entire area.

About 2,400 square meters of roads and alleys will undergo complete reconstruction. This includes the Jewish road and the “Justin Godard” street.

Over 50 existing facilities will undergo restoration. Special attention will be paid to the preservation of architecture and authentic materials of historic buildings such as the Government House, the former synagogue, the Marigosa House, the Tabak Mosque, etc.

The first phase of implementation includes the B zone bordered by the “Perlat Rexhepi” street in the north, the Justin Godard street in the south, the Elham Doci street in the east and west from the boulevard “Democracy”.

These interventions that the Albanian Development Fund will commence over the next few weeks along with the interventions that have already begun for the facade restoration and roofing by the Albanian American Foundation are intended to preserve those traces left by the identity and heritage of the city and to highlight civic values ​​such as patriotism and religious coexistence.

The resurgence of the historic center of Vlora on the tracks and walls of history creates the premises for   new developments of tourism-oriented private entrepreneurship. On the other hand, Vlora adds a new space that is expected to encourage tourists to visit not only for the sea and the wonderful food, but also for its culture and history.Thank you!