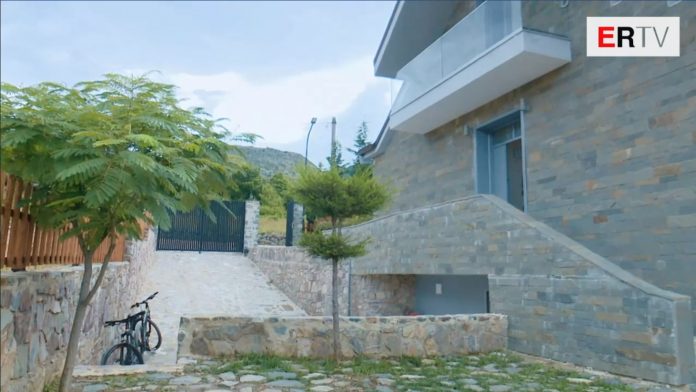 Shëngjergji, a picturesque village with extraordinary resources for the tourism economy, 40 kilometers away from the capital, but which was abandoned by the residents even three years ago, today is turning into one of the main tourist destinations coming from either England or Germany.

Attention to this almost forgotten village was restored immediately after the government’s involvement in the “100 villages” program, as well as the support to the development of agrotourism, to exploit not only the natural beauties but also the bio-characteristic foods of areas with potential absorption of tourists.

Prime Minister Edi Rama visited today one of the first inns built in St.Gjergj, “Tomadhe”, with the private initiative of Albina Cukos, who firsthanded the house with the help of the government, through the Fund for Agriculture and Rural Development Program in Agrotourism and today manages many tourists who visit it.

“It is a guesthouse supported by the national support scheme for rural development for inns and agritourism. The entity is the beneficiary of an amount of 8 million new leks for the reconstruction of the building that had begun to be built, but for financial impossibility was pending. They became AZHBR applicants and completed it in a record time. The inn is the first of its kind in the area, “says director of AZHBR, Frida Krifca.

“People are very happy and surprised with this nature, with this wonderful place. When Shëngjergji was declared as a tourist village we got spunton to do the reconstruction of the house and why not become the first guesthouse here in Shëngjergj to start tourism that it was left as a forgotten village and now the street, inns, people started pretty much changes, “says Albina.

In addition to the host, this entrepreneur has also set up the necessary infrastructure for mountain tourism, recreational facilities for children, playgrounds, etc., while cooperating with the area’s farmers for all agricultural and processed products served at the guesthouse.

“I’ve been busy with foreigners for a while. I expect a group of tourists on Monday from Wales. She took me a girl from a German company, said on 26 we have selected your guesthouse in Tirana and will come to see how tourism is done in Shëngjergj, “adds the entrepreneur further.

MP Xhemal Qefalia points out that all this investment, interest and tourist influx has come after the inclusion of this village in the “100 Villages” program.

“In the last 3 years, a huge influx of people who had left Shëngjergji, who had gone down to Tirana, with promotion to St. George, entering the 100 villages have come back and have come back here to set up businesses . They have opened local dairy. There is a comeback that was almost abandoned as a remote area. Shengjergji here was 5 years ago and 6 years ago and it is a reality. There was no one here. Neither knew anyone who has a Shëngjergj, “said Qefalia.

While Prime Minister Edi Rama described this as a model to be followed to develop not only this area, but wherever there are such natural resources. “The job is to preserve this kind of style. This is a model for further development “, underlined inter alia Prime Minister Rama.

Shengjergji has a mountainous relief and is rich in numerous springs and lakes. Some of the places that attract tourists attention are Shengjin Waterfall, Ruins of Shengjin Castle, Shëngjergji Castle, Val d’Elba, Sacred Place and the Old Tomb, as well as Mali i Gropa.

Supporting investments in agri-tourism by the Government is aimed at rural economic development through personal initiatives as a stimulating factor of the new economic model in Albania. These types of investments are also seen as a good opportunity for economic diversification, capitalization of natural resources and a new alternative for rural development.