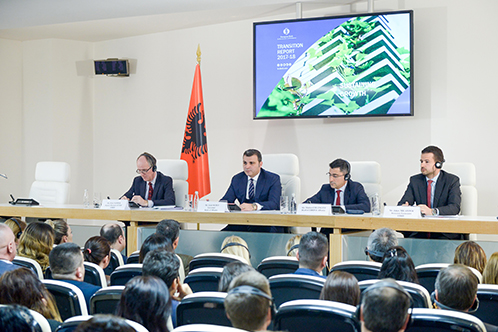 On April 11, 2018, at the premises of the Bank of Albania, was presented the Transition Report of the European Bank for Reconstruction and Development (EBRD), 2017-2018.

In the greeting speech of this activity, the Governor of the Bank of Albania, Gent Sejko stressed that the Transition Report this year  discusses some of the most important issues for transition economies, such as productivity convergence and firm dynamics, the importance of road infrastructure for economic growth and the new opportunities that the green economy can bring.

The report has a positive assessment of developments in the region. “After several years of anemic economic growth, the region already shows a revival of economic activity and prospects remain positive despite the geopolitical problems and internal and external challenges we face. Some countries in the region have moved faster than other countries of the globe with the same size and development. Capital inflows have been relatively sensitive, leading to narrowing the spread of interest rates in the region compared to those in large economies. More importantly, it seems that inflation is gradually turning to targeted levels and accelerated economic growth in the Western Balkans is backed by bank lending and some major infrastructure projects. “, said Governor.

However, the report notes that productivity growth has slowed down and, therefore, the dynamics of private businesses is identified as one of the major problems that should bother our region. In this regard, Governor Sejko said that the Bank of Albania considers that the development of the financial system is indispensable for the economic development of the country. In this regard, through our policies, we are trying to stimulate a more efficient distribution of banking lending, in order to be as fragmented or concentrated in certain sectors of the economy.

Further, the Governor added that productivity is important as it also determines the speed of convergence towards developed economies. “For this reason, I think that the regional and Albanian authorities should continue implementing structural reforms aimed at: 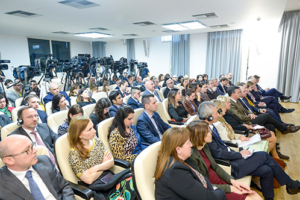 Regarding the future, the report positively evaluates the reforms undertaken by the Albanian authorities. The macroeconomic environment is estimated to be stable and the prospects show the preservation of the positive growth rate of the economy.

The report also notes that projects and investments in infrastructure have helped to boost Albania’s economic integration with the countries of the region, thus giving a positive effect on productivity and the growth of opportunities.

In closing, Governor Sejko stressed that, according to the report’s suggestion, it is time for the financial system to focus on the enterprise as the core unit of employment, innovation, productivity and economic growth.

Governor Sejko thanked the EBRD once again for the important contribution and concrete support with financial investments in key areas of our country’s economy, and invited him to continue to evaluate the potentials offered by Albania.

Later, the European Bank for Reconstruction and Development High Representatives presented the EBRD Transition Report for the period 2017-2018 and assessments on the Western Balkans and responded to the interest of those present.
News Source: BoA