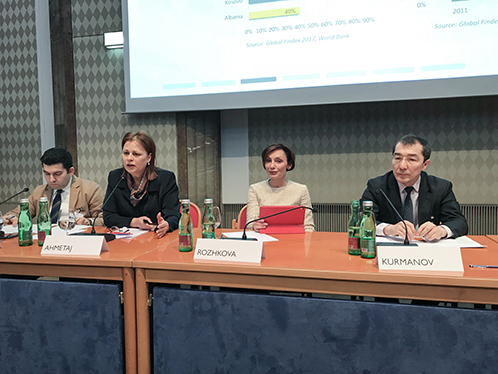 On 28-29 January 2019, the Second Deputy Governor of the Bank of Albania, Natasha Ahmetaj, participated in the conference on “Balance of Opportunities and Risks Fintech – implementation of the Balti Agenda” in Vienna, Austria.

At the center of the discussions at this conference was Balti’s Agenda on Financial Technologies, known today in the financial world with the term Fintech. This agenda was presented at the autumn meetings of the International Monetary Fund and the World Bank in Bali on October 2018 to promote technological innovation in the financial services sector.

High level representatives of the public and private sector from Central, Eastern and Southeastern Europe, the Caucasus and Central Asia participated in this conference. The conference was conceived in the form of sessions, with particular importance being the session on “Financial Inclusion, Development and Inclusive Growth”, in which Albania also participated.

During her speech, Deputy Governor Ahmetaj said that the Balkan Agenda forms a matrix of objectives to be met and a guide for increasing the potential of the economy of our countries and as such, it should be implemented nationally. But of course, any standard should be adapted, reflecting the priorities of each country, so that implementation can be effective.

In this context, the Deputy Governor focused on the case of Albania, where formalism of remittances and financial inclusion are two elements that require special attention for further improvement. For both of these elements, it outlined all the initiatives and steps taken by the Bank of Albania to improve the regulatory framework and the development of technological infrastructure.

At the end of her speech, Ahmetaj stressed that the Bank of Albania is among the pioneering central banks in the region for concrete involvement in public financial education. It has for years had a full annual agenda in this function, being aware that in recent years there is a shift of emphasis, from a traditional education to the economy, to knowledge of finance. This is because the sophistication of financial products and services, as well as the increasing involvement of Fintech in this industry, makes this need more urgent.

In the end, she underlined that if financial involvement is improving, it means that the public is becoming increasingly part of the financial system, using its products, thus contributing to the expansion of financial intermediation.