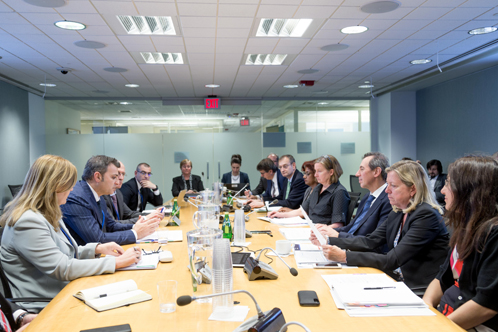 On 20-22 April 2018, the Governor of the Bank of Albania, Gent Sejko attended Spring Meetings of the International Monetary Fund (IMF) and the World Bank Group (WB) in Washington.

These meetings are attended by central bank governors and finance ministers from member states, as well as senior managers of international financial institutions.

Albania participated in these meetings with a joint delegation of the Bank of Albania – with the representative of the Bank of Albania Governor, Gent Sejko, First Deputy Governor, Ms. Elisabeta Gjoni, and other senior executives – and from the Ministry of Finance – with the Deputy Minister of Finance, Erjon Luci, and other leaders of this ministry. 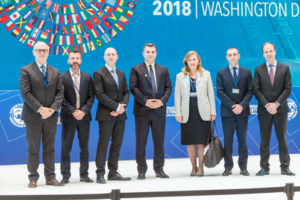 The IMF Finance Monetary Committee’s press release states: “… global growth is further strengthened and is increasingly supported on a broader footing driven by strong investment and trade recovery. Risks are broadly balanced over the short term but remain downward, beyond the next few quarters. Growth in financial weaknesses, increased tensions in trade and geopolitical aspects, and historically high global debt, threaten global growth projections. Demographic factors and low productivity growth can reduce the potential for higher and more inclusive growth in the future. ” 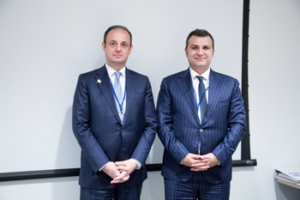 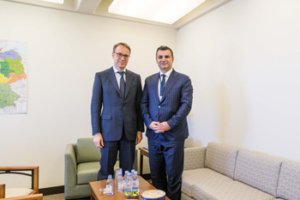 During the Spring Meetings of the IMF and WB, the Governor of the Bank of Albania, Sejko, held several important meetings with well-known international financial figures, among which we highlight: IMF representatives – Tao Zhang, Deputy General Manager, Mr. Alessandro Leipold, Executive Director for Albania, Poul Thomsen, Director of the European Department, Anita Tuladhar, Head of IMF Mission for Albania, Dong He, Deputy Director of the Monetary and Capital Markets Department; as well as representatives from the BB group – Mr. Cyril Muller, Vice-President for the European and Central Asia Region, Linda van Gelder, Regional Director for the Western Balkans, Patrizio Pagano, Executive Director for Albania; z. Marcelo Guigale, advisor to the BB, Arunma Oteh,

In addition to meetings with representatives of these two institutions, Governor Sejko also held other important meetings, among which we can distinguish the meeting with: Elke König, Chair of the Single Resolution Board (SRR); with the President of the National Bank of Germany, Dr. Jens Weidmann; and with the Governor of the Central Bank of the Republic of Turkey, Murat Çetinkaya. During the meetings with the central bank counterparts, the inter-institutional relations so far were evaluated, as well as discussing the enhancement of bilateral cooperation in the future. 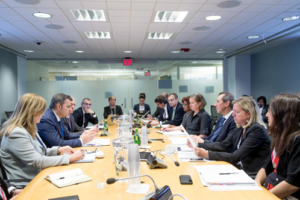 Governor Sejko stressed that the country’s economic growth is on a positive development trajectory. He added that stimulating monetary policy implementation has supported the growth of the economy, employment and wages as well as inflation. More concretely, regarding developments in consumer price performance, Mr. Sejko said that the Bank of Albania has been focused on meeting its main objective, maintaining price stability. Inflation is gradually turning to the target level, rising, and is projected to return to target by 2019.

Further, Governor Sejko added that the Bank of Albania, through the exercise of its role as monetary authority, has contributed to sustaining a stable economic growth and guaranteeing the country’s financial and macroeconomic stability. In the framework of the steps to be taken to accelerate the country’s future economic activity, Governor Sejko stressed that the Bank of Albania is committed to providing all the support through the continuation of the monetary stimulus. During the discussions, the Governor underlined that the continued co-ordination of monetary policy with the fiscal one remains vital for strengthening the macroeconomic stability of the country and for ensuring a sustainable growth.

Regarding the banking system in the country, Sejko said that the system is characterized by good financial indicators, but emphasized that lending encouragement and continuation with the plan of measures for the reduction of non-performing loans remain one of the Bank of Albania’s commitments in the future. He added that the implementation of the latter helped reduce the level of non-performing loans in December 2017 to 13.2%.

Another important issue discussed was the commitment of the Bank of Albania in co-operation with other institutions in the country to stimulate the use of national currency. The Governor underlined that the main purpose of this engagement is to improve the effectiveness of monetary policy and reduce the risks to financial stability and fiscal policy. 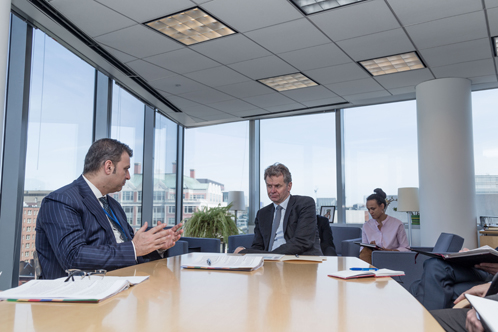 In conclusion, Governor Sejko added that the institution he leads will continue with the continuous improvement of its supervisory role, the proactive approach to banking regulation, increased banking system security and the promotion of payment system development, following international standards.

Senior IMF and WB representatives positively assessed the role and policy pursued by the Bank of Albania in the macroeconomic development and financial stability of the country. Also, senior IMF and WB representatives found the opportunity to encourage the Bank of Albania to further engage in the plan of measures to reduce non-performing loans, encourage lending and stimulate the use of national currency.

Further, senior international officials stressed that Albania should benefit from the economic growth trend, financial stability and a sound financial system to attract foreign investment so that this economic growth is healthy in the long run. 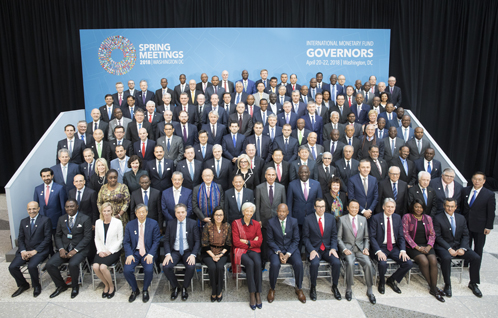 During the meetings, IMF and WB representatives welcomed the positive recommendation given by the European Commission to open negotiations for Albania’s membership into the European Union. They said that to improve the business environment and to move forward in the integration process, it remains of particular importance to continue structural reforms in the country.

In the framework of these meetings, Governor Sejko attended the plenary session of the International Monetary and Financial Committee of the IMF, as well as at the Executive Forum organized by the World Bank for policy makers and senior officials.