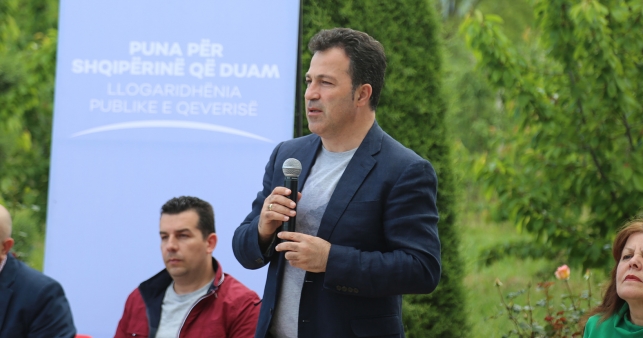 During an open conversation with the residents of the administrative unit Dvoran, Korça district, in the framework of the meetings of the public accountability tour, Minister of Agriculture and Rural Development, Niko Peleshi has expressed very optimistic about the whole process of the national financial support scheme, which out of every prescription has awarded winners and beneficiaries of grants and subsidies to a large number of applicants. The satisfactory number of applicants is the proof of a regular, simple and hopeful process for building, empowering and modernizing the rural economy in the country.

“The Agriculture Ministry has just completed the” Call “and has received applications for the National Funding Scheme of Subsidies and Grants that was 20 million euros this year. Almost half, more than 50% goes to farmers and livestock subsidies and the rest goes to investments in agro-processing, storage, production lines. We had a high number of pleasing applications, 30% more than last year, and because you can confirm it, a large part here has applied. The application was very simple this year, it was just an ID card. ”

But the success of this scheme is undoubtedly the announcement of the winners.

“I want to tell all those who applied in apples, for example, since here we are in the apple country, they have all won, 100%. All those who went and applied for new apples for apples have won, so they are declared winners. In total almost 90% of applicants have been declared winners and for other measures, such as point irrigation, or other farm investments, or matriculation, those who have applied for reimbursement of milk, that 100 leks per liter of milk. So the number of winners compared to the applicants is very high this year. ”

Minister Peleshi has again called for a greater confidence in the schemes and policies that are under way, because only so can Albanian agriculture be revitalized and modernized. The “first call” for the IPARD Program will soon be opened, which means a golden opportunity for all farmers, agro-processing, livestock farmers etc.