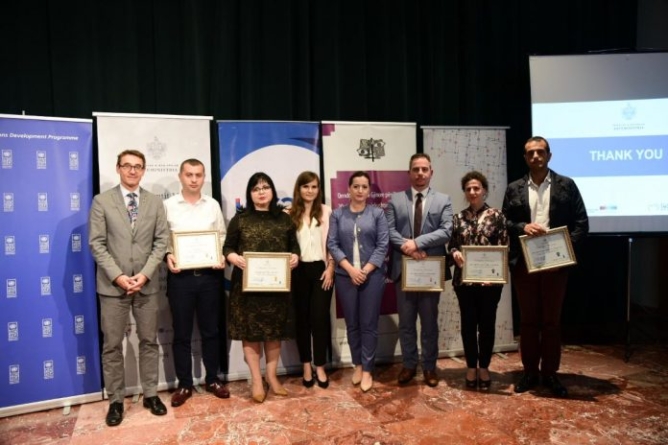 In the premises of the Prime Minister’s Office of the Opening and Dialogue (COD), a ceremony was held for the award of “Excellence Awards for Public Services 2018”, which was attended by Deputy Prime Minister Senida Mesi, international partners, donors and important representatives of various private institutions of the public.

This ceremony comes after the realization of a study where the “Mysterious Client Visits” assessment tool was applied, an instrument widely applied in the evaluation of the provision of services by private operators, used for the second time for public institutions in the country.

“Mysterious Client” through visits to various public institutions during the study period has tested whether the service provided meets the stated standards, observed the personal skills of employees, and evaluated their performance by identifying the strengths and poor service delivery.

The study was conducted in 7 main institutions and ADISA (Integrated Services Services Delivery Agency). A total of 344 visits were conducted at different time intervals and 14 scenarios were applied from different “clients”.

According to the main findings of the study, the overall state of the institutions assessed in Albania is presented at an average (80 out of 100). There is a higher performance by the ADISA Centers (90 out of 100), including all the counters in them. The counters of institutions without the “effect” of ADISA are at the level of 77 points / 100.

Deputy Prime Minister Mesi underlined the fact that hitherto improved access by providing 24/7 services through 5 ADISA Centers (full of 335 standardized and integrated services – and with a clear plan opening in 2018 and two other centers in Shkodra and Tiranë); as well as significantly increased the provision of online services through the government portal “E-Albania”: 1348 total services – out of which 575 electronic services and 773 information services; 33 documents with digital stamp.

“By December 2018 we will have trained 2500 public administration employees. We will also review the performance and growth performance assessment procedures by linking them closely to strengthening the capacity of employees through trainings and qualifications, “said Deputy Prime Minister Mesi.

It also focused on the “Citizens’ Rights Charter”, a public document of increasing transparency and quality of services, which will be launched soon and will clarify once and for all the rights and obligations that arise for the citizen in receiving services.

The “Mysterious Client” Project – Performance Evaluation in the Provision of Public Services by Central Institutions was carried out by the IDRA, the CID and the Gender Alliance for Development (GADC) Consortium. the support of the ISDA Support Project, a donor fund contributed by the Italian, Austrian and United Nations Development Program (UNDP), which supports the reform of services and is implemented by the Albanian government in partnership with UNDP.