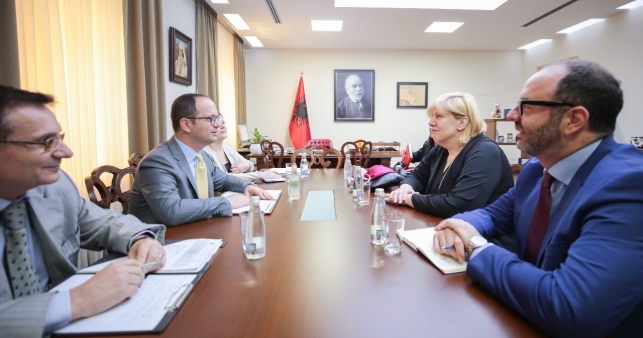 On 22 May 2018, Minister for Europe and Foreign Affairs, Ditmir Bushati, held a meeting with the Council of Europe Commissioner for Human Rights, Dunja Mijatović. The meeting took place in the framework of her first visit to our country after her appointment in April 2018. The focus of the visit was related to the rights of children, the rights of persons with disabilities and access to justice.

At the beginning of the meeting, Minister Bushati congratulated Commissioner Mijatović for the election of the CoE Commissioner for Human Rights as the first woman in the post and the first Commissioner from the Region. He emphasized Albania’s commitment to respect for human rights, within the framework of the activities of international organizations, especially the Council of Europe, but also as part of the commitments to open negotiations with the EU. The protection of the rights of children and women, the fight against domestic violence are commitments not only to the Albanian Government, but also to the entire society, Minister Bushati said.

Commissioner Mijatovic welcomed Albania on the steps taken towards the protection of human rights, especially of children and women, but also of other persons in need, fostering cooperation between the Government and representatives of these strata, as well as civil society, in general. This is an important dimension of the work of the Council of Europe, where the work of the Commissioner for the Protection of Human Rights will be focused, Mijatovic. I believe in the fruitful and continuous cooperation between Albania and the Office of the Commissioner in this regard, she said.

Commissioner Mijatovic, will have meetings in the coming days with other members of the Government Cabinet, with civil society representatives as well as associations and institutions dealing with these vulnerable layers.