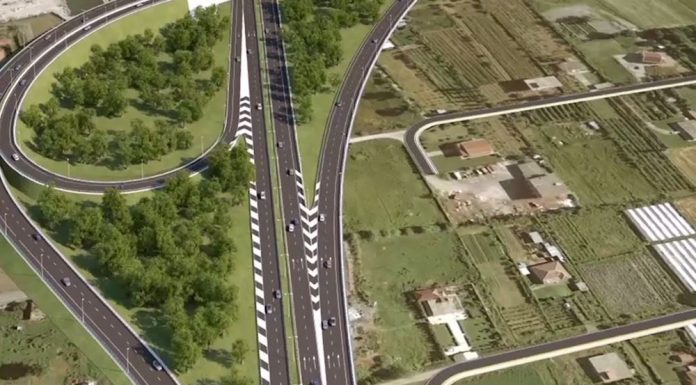 In the framework of improving road infrastructure and Albania’s interconnection with the region and Europe, the Ministry of Infrastructure and Energy signed a concession / PPP contract for the design, construction and maintenance of Milot-Balldren road segment .

Minister of Infrastructure and Energy, Belinda Balluku, said today at the plenary session of the Assembly, that “Milot-Balldren axis, which also includes the Byzantine Passage of Lezha is part of the Adriatic-Ionian highway, otherwise called the Blue Corridor, a highway that will stretch across the eastern coast of the Adriatic and Ionian seas and the western coast of the Balkan Peninsula by linking some states. “

During her speech, the Minister said, “this corridor is a priority in the” Sectoral Transport Strategy and National Action Plan 2016-2020 “, in order to integrate the country’s road segments into the Balkan infrastructure networks and pan-European transport system.

The Milot-Balldren contract, she underlined, also provides for a maintenance system where the Private Partner will be disbursed on a conditional basis based on the quality of the service provided or otherwise performance contracts. The maintenance voice includes the operation and maintenance of the road segment, tunnel, bridges and all the works of art.

The importance of the Milot-Balldren road segment is not limited to being part of the Blue Corridor. Mostly, this segment is part of the axis linking the capital to the northwestern part of the country.

According to Balluk, this area in general and the city of Lezha in particular have a great economic and tourist potential. Improving the road infrastructure in this segment would not only enable further economic development of the area, but also facilitate traffic in this area increasingly frequented by local tourists and foreign tourists.

Also from the studies conducted, it turned out that the improvement of the technical conditions on the Milot-Balldren road would have a significant impact on reducing the risk of accidents in this axis as well as alleviating the difficulties during the winter season.

“The Albanian Government has compiled requests forcing the Private Partner to build the Milot-Balldren segment according to the highest technical standards and to provide a more quality maintenance service, as any additional costs, otherwise known as unforeseen work, which may arise from this project due to irregularities or defects will be borne by the Private Partner, “Balluku said.

The proposed project includes the construction of the “Milot-Balldren” road segment, the construction of the 2-gangway tunnel in Renc Mountain and the rehabilitation and expansion of the two existing bridges, namely Mat and Drin. It is also proposed to build a total of 9.5 km of secondary roads and joining routes to enable and facilitate the circulation of vehicles in the area.