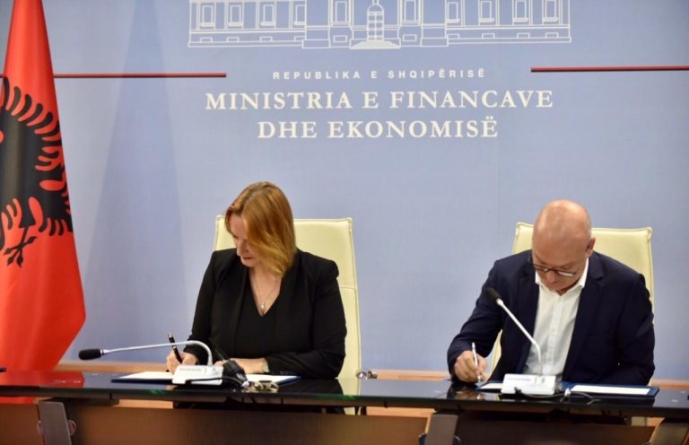 The Ministry of Finance and Economy and the Auditing Media Authority signed a Cooperation Agreement between the two institutions.

The agreement, signed by Minister Anila Denaj and the chairman of AMA, Gentian Sala, aims to provide better protection of the general public interest and especially of the economic interests of consumers. This institutional cooperation will serve the effective implementation of consumer protection legislation, in the commercial practices of providing services by audiovisual media operators, through the observance of the obligations provided for by the applicable legislation.

Minister Anila Denaj praised the signing of the agreement and said that it paves the way for cooperation between the two institutions in function of the objectives and the strategy for consumer protection.

“ It is a cooperation agreement signed between MFE and AMA, within the framework of consumer protection policies. Above all, we open the door to the cooperation that the two institutions, with the objectives to implement and the strategy not only to preserve the customers, but to establish a transparent communication platform, should follow and continue the institutions with the respective structures will to follow this agreement with the by-laws that will be implemented, “said Minister Denaj.

For his part, Mr. Gentian Sala considered the agreement very important to the Audiovisual Media Authority, as the auditorial market has a tremendous impact on the consumer.

The purpose of the Agreement is to determine the issues and forms of co-operation between the two institutions in order to protect the general interest of consumers in the audiovisual media sector, in the commercial practices of providing services by field operators.

Under it, the institutions will be committed to cooperating on issues such as: drafting and improving sub-legal acts; ensuring the effective implementation of existing legislation; exchange of information; organizing joint meetings; publication of data; etc.

State institutions have not only the power to draft policies and legal acts, but it is their obligation to make them as functional as practicable, and this will also serve the signing of this agreement.

Consumer protection is one of the most important policies of our country, as well as for the countries of the European Union. The Government, with the signing of the Stabilization and Association Agreement and now with the candidate status for the opening of the EU membership negotiations, has been engaged in continuity to give the Albanian consumer the same rights and protection as any customer of a European country .

The initiative for signing the cooperation agreement between MFE and AMA was undertaken in accordance with the respective legislation of the two institutions, respectively the law no. 9902/2008 “On Consumer Protection”, amended and Law no. 97/2013 “On audiovisual media in the Republic of Albania”.