For year 2016, the targeted Inflation has not been reached. In the monetary development perspective, this phenomena has brought positive effects. Inflation continued to be below the official target, prompting further monetary easing. Average annual inflation has remained below the central bank’s 3 % target since 2012, reaching 1.9 % in 2015.

It decelerated further in the first eight months of 2016 to just 1 %. In economic terms low inflation reflected low prices for imported products and weak domestic inflationary pressures due to still below-potential economic output. The central bank reacted by continuing to cut the key interest rate to a record low of 1.25 % in May 2016 and signalling its intention to keep the interest rate low for an extended period. Loan interest rates also decreased.

This has provided an economic bumper by easing the loan taking process, but bank lending was hampered by risk-averse banks reluctant to extend credit amid a still high level of non-performing loans (NPLs). The freely floating exchange rate of the leak has remained remarkably stable against the euro in the last 5 years.

Interest rates on some lek: 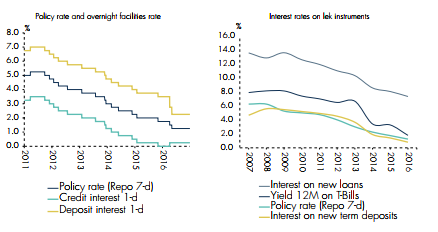