Partners and interest groups benefiting from the LOCATIONS project Carbon Transport in Cruise Destinations Cities- where APD is partner, developed today in Durrës joint meeting aimed at improving logistics in navigation and transportation planning. This meeting is intended presentation of LCTP to stakeholders, aiming at its implementation on
the city of Durres. Already according to the organizers was realized “Plan for the reduction of carbon in transport – LCTP) for the city of Durres. Drafting the development plan for Durrës, as a city with a cruise destination, will enable measures for one low carbon transport and the creation of multimodal connections for them ease it as much.
Along with representatives of APD, the Transport Institute and the Municipality Durres, as partners of the project, attended today’s meeting representatives from the University “Aleksandër Moisiu”.

The preparation and implementation of the LOCATIONS project has started in 2016, while the project will be completed in 2020. The partners of this 4-year project  are also the ports of the cities of Lisbon, Malaga, Zadar, Rijeka, Ravenna and Trieste. 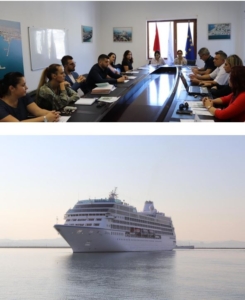