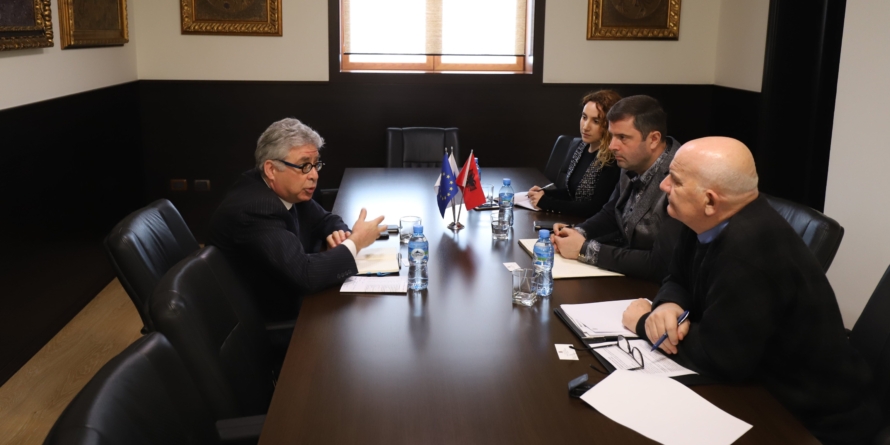 The Chairman of Chamber and Commerce and Industry of Tirana held a meeting with the Ambassador of Federal Republic of Belgium, Francois Bontemps.

The Chairman of Chamber of Commerce and Industry, Tirana mr. Nikolin Jaka met on March 11, 2019 with the Ambassador of Federal Republic of Belgium, Francois Bontemps. The opportunities of deepening the economic cooperation between our two countries, were the main part where the meeting was focused. Mr. Bontemps by thanking the realization of the meeting said that Albania is the third country together with Macedonia, Bulgaria, Kosovo that are part of his mission as ambassador. He emphasized the fact that in Bulgaria are many investment companies, by empasizing the fact that in Bulgaria are ranked the 5th, in Macedonia the 1st (bus manufacturing for the American market, Van Hol company) as about the invesment companies, while in Albania these companies as lacking. Z. Bontemps, specified that he is responsible for the economic and political part and he is seeking to promote and initialize a relation between the interested parties. Lately, he is informed that a Belgian club is interested to organize a several day meeting in May, that have expressed the interest to organize a seminar. A group of about 15 people will be present from May 16 in Albania, who propose as well the organization of a networking session on May 17, 2019. Mr Jaka expressed his interest on sectors that will be present in this meetings and mr. Francois mentioned as below:

In the organization of this event was agreed that the two main contact points are AIDA and CCIT. Mr. Jaka asked even for the contact list in order to organize the B2B meetings.

This is the first visit in Albania that is expected to be organized by the Belgian entrepreneurs, and therefore even the expectations are not very high, considering that as a first visit it is organized more in the framework of a general overview and exploration of sectors where is aimed a further investment.

At the end of this meeting, the chairman of Chamber of Commerce and Industry thanked for the visit dhe Belgian Ambassador and compliments him on the direct initiative to do something concrete in promoting initiatives by emphasizing that “the business is operative and considers any concrete and tangible initiative for economic cooperation”. “It is very important that good political relations are exploited, especially since Belgium has a number of satisfactory investments in the region that are missing in our country “, said Jaka.