On the 9th of November, Mr. Dan Oryan, the Ambassador of Israel to Macedonia and also the Head of the Balkans Department in the Israeli Foreign Ministry promoted his book “When Dad Grows up” which was out in Macedonia in 2 more languages.

The special edition is sponsored by USAID and the Lions’ of Macedonia with the cooperation of the South East European University.

The Israeli Ambassador was very excited about the book publication and told Follow Business Albania that this is the most special moment he had since the book was published the first time in Israel in 2008.

Dan Oryan is married to Sharon and has three sons: Tom, Nadav and Roi. This is Dan’s first book illustrated by Pepi Marzel. Even today, in his early fifties, he still is not sure what he wants to be when he grows up… , Amazon.com says about his book.

During his career, he has been in charge of the literature desk at the Division for Cultural and Scientific Affairs at the Foreign Ministry.

More than two years ago, Dan Oryan  visited Albania as Head of the Balkans Department in the Israeli Foreign Ministry. At that time, his book in Albanian appeared in Macedonia.

During his visit in Albania and lately to Kosovo, Oryan promoted some favorite places by jumping. The diplomat, whose dream was to become a world champion in gymnastics, jumps at famous places when he passes from one country to another country “leaving his traditional mark.” 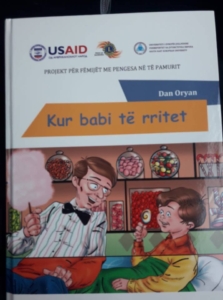