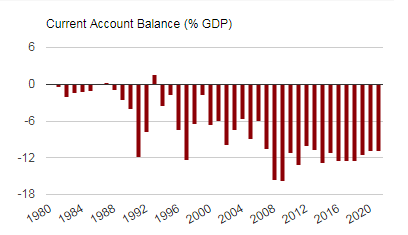 The Current account balance as a percent of GDP is an important indicator of the level of international competitiveness of a country. It refers to all transactions other than those in financial and capital items. In broad meaning countries holding a strong current account surplus are heavily depended on exports, with high savings ratings but weak domestic demand. Meanwhile countries holding a current account deficit have strong imports, a low saving rates and high personal consumption rates as a percentage of disposable incomes.

Currently Albania exhibits a deficit current account. This made Albania No. 152 in world rankings according to Current Account Balance (% GDP) in year 2015. The world’s average Current Account Balance (% GDP) value was -4.12 %; Albania was 7.24 less than the average last period. From 2015 the current account deficit narrowed but still it remains considerably large. Despite reduced oil exports, a one-off reduction in electricity imports (due to improved hydropower conditions) and strong tourism receipts helped narrow the trade deficit. Remittances, accounting for 5.7 percent of GDP, have remained broadly stable despite weak growth in the main source countries (Greece and Italy). However, risks from the large external deficit are limited, as more than three quarters of the current account deficit are financed by foreign direct investment.