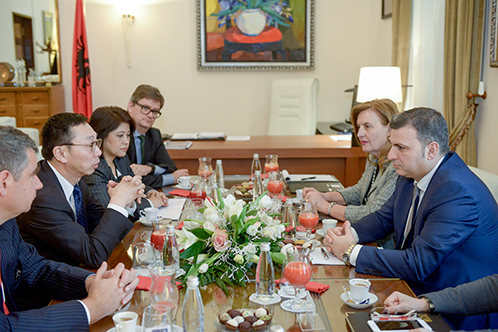 Deputy Director General of the International Monetary Fund (IMF) Tao Zhang, visited Albania on 12-13 February 2018. During the visit, Zhang held a series of high-level meetings with the country’s main authorities.

Initially, Governor Sejko praised the very good relations of cooperation with the IMF, which, through the provision of technical assistance, helped to draft the country’s economic and financial reforms.Governor Sejko said that the attention of the Bank of Albania has been focused on its main objective, maintaining price stability. Regarding the banking system, the Governor said that the system is characterized by sound financial indicators. Some of the issues in which it was stopped were the promotion of healthy lending and the reduction of non-performing loans, the ratio of which in December was 13.2%.

For his part, IMF Deputy General Director, Tao Zhang, praised the Bank of Albania for its policies, which have contributed to the preservation of the country’s macroeconomic stability and the continuous consolidation of the financial system in Albania.Mr Zhang said that Albania is making progress towards convergence, however, he added that, given that the global economy is growing at positive rates, it is high time for Albania to continue to undertake further reforms.

Focusing on the country’s economic activity, the IMF’s Deputy General Director stressed that maintaining the pace of reforms and strengthening institutions and good governance are of particular importance to improving the business climate and absorbing more investment loans in Albania.