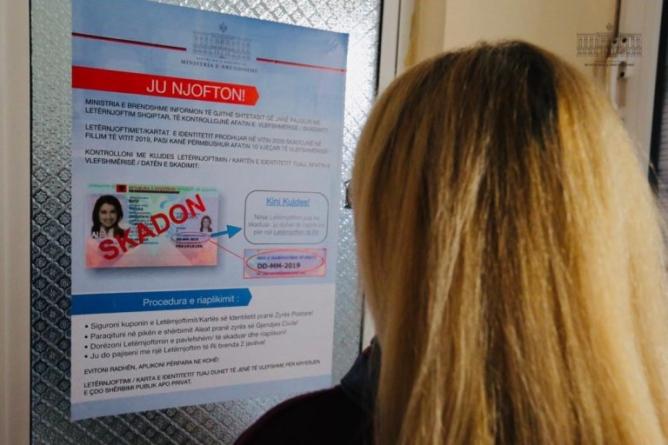 Why are there around 1.4 million ID cards expiring in this period?

Bledar Doracaj: The first identity card issued by the Authority dates back to March 2009. And from March 2009 to March 2019, dates are related to the 10-year validity of the ID card validity, about 1.4 million Albanians who end their identity cards.

Can I apply for an ID card even before her expiration date?

Bledar Doracaj: Absolutely yes, every citizen, in order to be able to obtain the new identity document, ID card in the concrete case can be presented at the counters of the concession company “Aleat” and may apply before that date in order to in case of any possible flux at this year’s start or even during the year, avoid as many ranks or streams as possible in the counters of the company “Aleat”.

Can Albanian citizens live outside of Albania, can they apply in their places of residence?

Bledar Doracaj: Yes, there are some countries like Greece, Italy, the United States, Belgium, England, Germany, where the Albanian state offers the possibility of applying for its citizens living beyond the territory of the Republic of Albania at our embassies to apply for passports and identity cards.

What additional measures have been taken to cope with this flux?

Bledar Doracaj: In cooperation with “Aleat” we have already drafted an action plan to enable citizens with identity cards in all centers where there is civil status and we are in the implementation phase. We have also intensified intensive communication with the public to make it aware and to make sure that all those who expire identity documents from March 2019 and continue to appear at the counters of the Aleat Company to be equipped with identity cards. We have started and distributed posters in all service counters, not only the civil office or Aleat company, but also the OSHEE and Albanian Post Customer service counters.

What documents are needed to update the ID card and passport?

Bledar Doracaj: No ID card is needed for the identity card, which is purchased at the Albanian Post counters and the physical appearance of the person at the time of application. For passport equipment, the documents are simply a Police Form, which identifies the citizen, a copy of the coupon to be provided with a passport and the appearance at the counters of the company “Aleat” to make the application and then to be equipped with passport and card.

Are sufficient capacities to equip 1.4 million Albanians with a card before the June election date?

Bledar Doracaj: I believe that the concession company has the necessary capacities, but here it is not merely a mere matter of capacity, it is a matter of flux. We are here to offer a better and quality service to the citizens and also quickly and therefore we have started communication so that they will not stay in the counters for ID cards.