Looking at Albania’s GDP in the last 13 quarters for which the data are available, it can bee seen that its real year-on-year growth (net of inflation) has averaged 3.4%. The growth rate was only 1.7% at the beginning of 2015 and reached the 4.5% level at the beginning of 2018, with individual rates over different quarters being close to the trend line (Figure 1).  The growth trend line indicates that the economy has been expanding consistently in the last 13 quarters for which data are available. 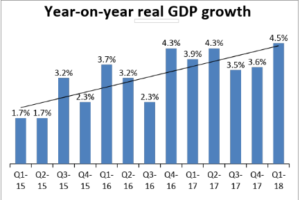 Looking at employment data overs the same period, it can be seen that its year-on-year growth has averaged 4.9%, which is 1.5 percentage points higher than the average real GDP growth. This discrepancy runs against empirical evidence – normally employment grows slower than the GDP. Moreover, looking at individual growth rates for each quarter, it cannot be seen the same consistency noticed in GDP growth. In some quarters, year-on-year growth rates are extremely higher than the trend line and in some much lower (Figure 2). 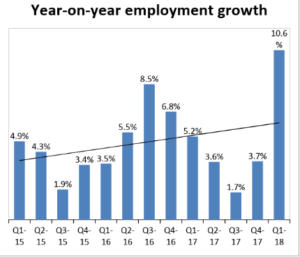 This discrepancy can be explained by the fact that IMF and EuroStat exercise a much stricter supervision over INSTAT in relation with GDP data, as compared to employment data. The unexpected jumps in employment do not seem to be statistical flukes – more likely they are statistical glitches.

While employment data may not be reliable, tax revenue data are. They come directly from the Treasury, which by law, has to be precise to the cent. Accounting for inflation, tax revenue’s year-on-year real growth averages 3.4% over the same period, a rate close to the GDP’s growth rate. However, looking at individual growth rates for each quarter, it cannot be seen the same consistency noticed in GDP growth. In some quarters, year-on-year growth rates are extremely higher than the trend line and in some much lower (Figure 3).

Given that tax laws have not been changed significantly over the last three fiscal years, these oscillations in tax revenue growth rates can be explained with the inconsistent work of tax and customs authorities. This is not good for the business climate in the country. Businesses need to be taxed consistently – they need not be subjected to the whims of tax authorities or the temporary needs of the government for tax money. 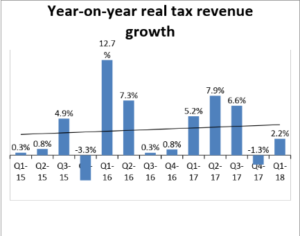