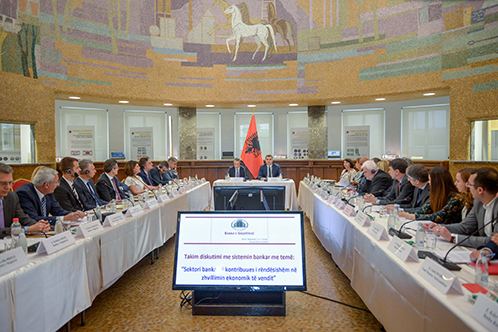 On May 29, 2019, at the premises of the Bank of Albania, a meeting was held on “The banking sector as an important contributor to the economic development of the country”. Turning to a tradition, this meeting aims to further strengthen the relationship of cooperation with the banking system. At this meeting, organized by the initiative and under the direction of the Governor of the Bank of Albania, Gent Sejko was attended by Bank of Albania leaders, senior executives of commercial banks (general directors and their deputies), as well as representatives from the International Monetary Fund and the World Bank.

At the beginning of his speech, Governor Sejko said that through this meeting is aimed at achieving a concrete plan of measures for improving the quantity and quality of lending, as well as expanding the range of financial products.

Focusing on the performance of the banking sector, the Governor appreciated the important contribution the banking sector has to the country’s economic development, where the banking sector’s financial savings accounted for about 70% of GDP, while the volume of loans granted from it is about 35% of GDP. In the Bank of Albania’s judgment, the banking sector is the main pillar of the financial system and at the same time among the most developed and professional segments of the economy.

The consolidation of the banking sector and the continuous reduction of credit risk are expected to bring an increase of the lending process in the country. For the realization of this objective, Governor Sejko urged representatives of the banking sector to reflect a more active approach to fulfilling their core mission, that of healthy lending to the economy.

To this end, Governor Sejko considered it necessary for the banking sector to take the necessary steps to expand the range of lending products and to finance new sectors of the Albanian economy, such as agriculture and other innovative IT businesses . This process should be accompanied in parallel with an increased attention by the banking sector to show the utmost care in selecting and financing sectors that offer a high return potential. It is also the task of the banking sector to complement the range of financial products with derivative instruments of hedging against the exchange rate risk for that category of borrowers who are exposed to it.

At the close of his speech, Governor Sejko said that another important role of the banking sector is the provision of payment services in the economy. In this regard, in order to improve the small value payment market, the Bank of Albania has drafted the bill “On payment services”, with the adoption of which will create conditions for the promotion of technological innovations, promoting the introduction of more efficient instruments , faster and lower cost, which will increase market competition, and will ensure transparency and above all consumer protection.

In his speech, the Chairman of the Albanian Association of Banks, Silvio Pedrazzi said that the banking sector appears stable and liquid, a full precondition for quality lending to the economy. Mr Pedrazzi called on businesses to present new financing projects, which generate employment growth in the economy. In conclusion, he expressed the commitment of the banking sector to contribute to further economic development of the country.

Further on, the meeting continued with two specific presentations “Can more be done for credit growth and how?” And “Modernization of payment systems”, which were followed by active discussions of the participants on the topics presented and issues of raised during presentations.

In closing, the meeting was highly regarded by all participants who expressed their commitment to furthering this joint effort by collaborating on drafting a plan of measures based on the conclusions reached at this meeting.