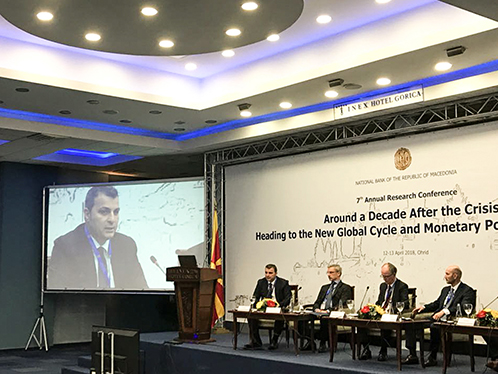 On April 13, 2018, the Governor of the Bank of Albania, Gent Sejko participated in the 7th Annual Research Conference organized by the National Bank of the Republic of Macedonia on “About a decade after the crisis: towards a new global cycle and monetary policy normalization”, in Ohrid, Macedonia .

Participants in the conference were governors and representatives of central banks, senior officials from domestic and international financial institutions, as well as various policy makers.

The focus of this conference was to address the experiences and conclusions drawn from the crisis as well as the potential needs for redesigning policies in addressing the changing environment.

The proceedings of this conference were opened with the greeting speech of the Governor of the National Bank of the Republic of Macedonia, Dimitar Bogov, who after thanking the participants, presented the program of the conference, pointing out that the purpose of this activity was to exchange views and experiences with colleagues from different countries.

Discussions of this panel focused on the challenges faced by central banks a decade after the crisis and economic developments in the countries; the role of central banks in economic growth through the preservation of financial stability; monetary policies and the various measures applied in this regard. 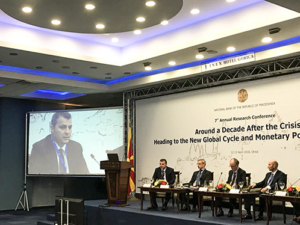 Governor Sejko made an expose of the Albanian economic situation focusing on the economic and financial developments and the potential impacts of the monetary policy normalization. He stressed that the Bank of Albania remains ready to take all necessary measures by giving its contribution in support of a stable economic growth and guaranteeing the macroeconomic stability of the country. He added that the easing monetary policy pursued by the Bank of Albania has reduced private-sector financing costs, boosted lending in lek and helped improve borrowers’ financial standing.

The Bank of Albania’s next priorities are mostly oriented towards identifying measures to promote lending, the continuation of the plan of measures for the reduction of non-performing loans and the strengthening of financial stability. 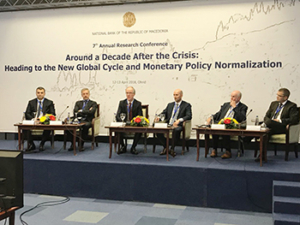 Another issue dealt with by the Governor was the importance of a proper combination of macroeconomic policies where a key role plays the coordination of monetary and fiscal policy.

Governor Sejko underlined the importance of further reforms to improve the country’s development model and business environment, as well as move forward in the integration process.

In conclusion, Governor Sejko said that the long-term political future and economic prosperity are closely related to the process of integration into the European Union. He added that the cooperation and the institutional framework have a contributing role to the convergence process, however, central banks, as policymakers, should take the necessary measures to prepare the economy for the membership process.