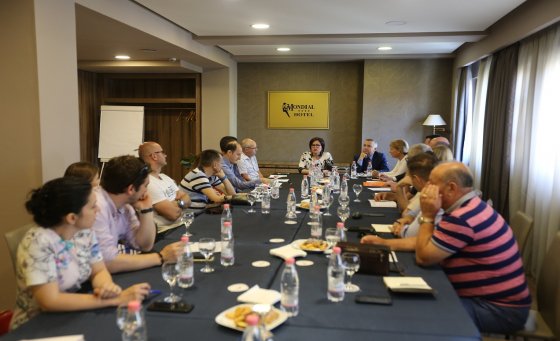 The General Directorate of Taxation organized a joint table with representatives of the main associations of tourism sector in the country.

In her speech, Ms. Valero thanked the representatives of the associations for the spirit of cooperation they are showing and emphasized that the Tax Administration has the main purpose to help taxpayers to respect their legal obligations, also taking care to ensure the required transparency with domestic and foreign tourists.

In this context, the General Directorate of Taxation has started implementing a detailed action plan.

“We, as a tax administration, intend to encourage taxpayers of this sector to improve their self-declaration and correctly fulfill all the obligations stipulated by the law. This is also the novelty of this plan, unlike those previously implemented.

The purpose of the implementation of these measures, to be extended by the end of September, is not the penalization of businesses but the end of this season, the reduction of informality and the increase of revenues in the state budget, “said Mrs. Valjer.

The plan of measures provides that they will remain outside the day-to-day verifications and controls of the relevant structures, only taxpayers who have improved their self-declaration of payable VAT and social security contributions for each month of this year’s tourist season , compared with the previous declarations of the previous year.

Representatives of the four main associations in the country praised the initiative of the General Directorate of Taxation to get familiar with the issues that disturb business in the tourism sector. They demanded increased co-operation to combat informality and unfair competition. The fiscal facilities that the Albanian government is undertaking, as well as the quality of service to taxpayers, were positively assessed.

The Tax Administration will continue to be committed to being at any time present in the territory, to check and verify closely the situation in all the tourist areas of the country.