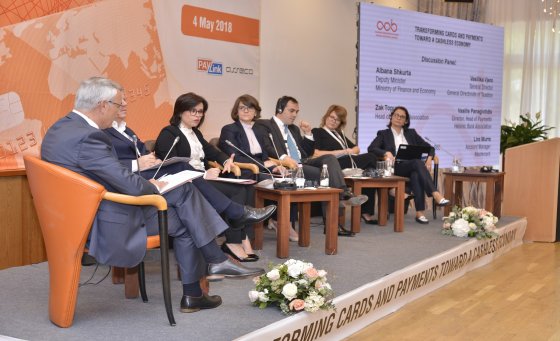 The General Director of Taxation Ms. Vazilika Vjero participated in the forum “Increasing the use of the card as a payment instrument” organized by the Albanian Association of Banks on May 4, 2018. The forum aimed at discussing among the representatives of the banking system, government, tax administration, entrepreneurship etc. on the ways of reducing cash in the Albanian economy.

During the discussion panel discussion, the General Director of Taxation said that the fight against informality has been the focus of the work of the Tax Administration over the last two years and continues to be based on concrete action plans for certain taxpayers sectors but also to disturbing phenomena. 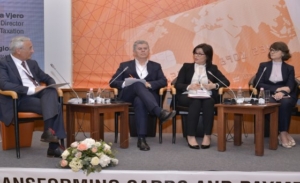 “In Albania, the gray economy can be reduced through the promotion of electronic payments or the imposition of limits on the amounts paid for ‘cash’. This is mainly found in business-consumer relations, where the latter pays, but often does not require a bill. In this way, unwittingly favors the gray economy and on the other hand the business does not register this transaction, “said Ms. Vjero.

The General Director of Taxation also underlined the fact that it is time to undertake legal changes to facilitate the taxpayer, in order to increase the formalization of payments.

This, Ms. Valjer said, can be achieved by imposing stronger constraints on the use of cash, through: developing e-filing, fiscalisation, non-cash transactions for executed transactions between two businesses, when transaction value exceeds 50,000 ALL, and allowed not allowed transactions executed between a business and an individual when a specified value is exceeded.

Mrs. Walter also called for increased co-operation with the private banking system to promote the payment of tax obligations, which are being implemented through e-Albania and are 13 in total.

Among the participants were evaluated the results achieved by the Tax Administration in reducing the informality, and supported the reforms undertaken in improving the services.