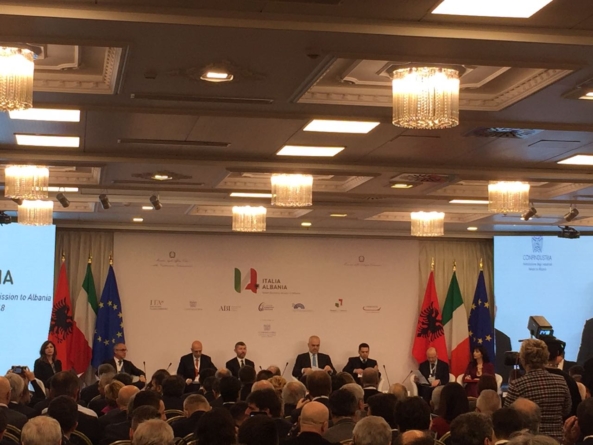 The first Italy-Albania trade mission kicked off in Tirana with a total of over 346 participants including 178 companies, 14 industrial associations and three banks.

On Monday the mission will hold its Italy-Albania Business Forum, with the participation of Albanian Prime Minister Edi Rama.

The mission’s objective is to increase the already well-established economic cooperation between the two countries and to expand business and investment opportunities for Italian businesses with a focus on three sectors in particular: agrobusiness, energy and infrastructure.

The mission is being led by Industry Ministry Undersecretary Ivan Scalfarotto with the participation of the Italian Ambassador to Albania Alberto Cutillo, Confindustria President Vincenzo Boccia and ICE President Michele Scannavini.

According to the Albanian Institute of Statistics, trade between the two countries totaled two billion euros in the first 10 months of 2017.

It said Italy is Albania’s top trade and investment partner, with the presence of over 2,662 businesses either 100% Italian owned or with mixed ownership, bringing technological and production competencies.

Despite feeling the effects of the global economic downturn and in particular the eurozone crisis, Albania has managed to keep a solid level of real GDP, up 3.4% in 2016, with estimates for 2017 predicting a 3.7% increase. The country has a positive economic outlook in the mid-term future as well, with estimates predicting an average annual growth of 3.7% for the period of 2018-2022, according to the Economist Intelligence Unit (EIU) based on International Monetary Fund (IMF) figures, and offers interesting opportunities for Italian businesses.