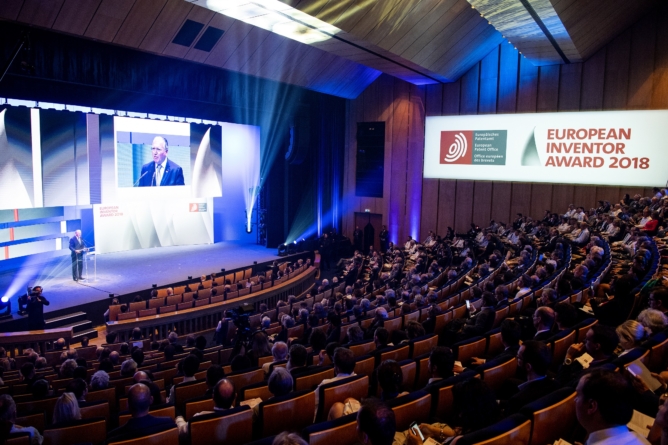 Albania Can Make it to Develop High-Level Patent Capacity
Live from Paris, Saint-Germain-en-Laye

“My message would be: It is possible for an emerging country to develop a high-level patent capacity. It is not a question of country’s size but a question of priority in its policy.”

This was the main message of the European Patent Office (EPO) President, Benoit Battistelli during an exclusive interview with FOLLOW BUSINESS ALBANIA in the sidelines of the European Inventor Award 2018 ceremony in Paris, Saint-Germain-en-Laye, attended by some 600 guests from the areas of politics, business, intellectual property, science and academia.
In addition, he urged the Albanian universities and companies to apply for patents at EPO. “This implies to make people more aware of the importance of the patents on the economy,” he added.
Launched by the EPO in 2006, the European Inventor Award is one of Europe’s most prestigious innovation prizes, highlighting individual inventors and teams of inventors whose inventions provide answers to some of the biggest challenges of our times.
The winners are selected by an independent jury consisting of international authorities in the fields of business, politics, science, academia and research, who examine the proposals in terms of their contribution towards technical progress, social development, economic prosperity and job creation in Europe.

Generally speaking, EPO is an international organization and its 38 member states are very diverse. They all belong to Europe geographically but they are very different in terms of their economic development. That is why we have developed a policy to try to upgrade the patent capacity of all our member states in order to have a more proportional system. In this context, Albania is specifically benefitting from this policy which we call it “welcome policy”. So, it is a policy for the new members. Since Albania joined the EPO, it has been benefiting from such trainings in order to train the qualified EPO professionals for the national office but even for the private companies.
In addition, we have helped Albania’s EPO Office to use modern IT tools in order to develop its capacity. We also have helped Albania’s EPO Office to modernize its legislative and regulatory framework. The third pillar of our cooperation is to develop what we call the patent awareness activities. One of the main challenges for the emerging countries is to develop a culture of patents, a culture of intellectual property and this implies to organize meetings, seminars, directly with the universities, with the companies, specialists and SMEs.
So there is a large program of all these events. As an EPO, we have created what we call ‘The European Patent Academy’ which is in charge of developing all these events within all the member states especially for the developed countries and for the less developing economies.

I visited Albania two years ago. I know that the level of patent application is very low. But once again, I think it is possible. Instead of speaking of the size of economy, we have countries in Europe which are able to develop good capacity in patents. So, it really depends on the policy to develop innovation in each country. So, I am convinced that the Albanian universities or some Albanian companies could apply for patents at EPO. But this implies to make people more aware of the importance of the patents on the economy.

I think that the main reason is the high qualification of our staff and also their high motivation. You don’t work at EPO just by chance. You work at EPO because you are motivated. You are motivated to contribute to the future of Europe and you are motivated by the fact that we provide services which are useful for the economy. It is difficult to be hired by EPO because it does exit a strong competition. To give you an example: for each posting, we receive about 200 candidates. In other words, they are very motivated and highly qualified. This is the first reason.
The second reason is that we are in a system where if you have the support of all the member states, it is possible to take decisions. And we devote all our sources only to the patents. With this technical and political support, you can obtain successful performance.

I think each year, it is more and more impressive because we have more and more candidates. This year, we had around 530 candidates and to select 15 out of them and then 5 out of the 15 is extremely difficult. So, I am always impressed by these inventions. At the same time, the inventors are very interesting people. What we think as European Patent Office (EPO) is that these people are not enough known. They are the Heroes of our times and people do not know much of them, except in some cases. So, we are trying with your help and that of the international media to draw the public attention on them.

My message would be: It is possible when you are an emerging country to develop an high level patent capacity. It is not a question of country’s size but a question of the priority in the country’s policy.

—–
The 13th edition of the European Inventor Award ceremony took place on 7 June 2018 in Paris, Saint-Germain-en-Laye.

There are 6 prizes awarded in the context of European Inventor Award 2018 under 6 categories: Industry/ Research/NON-EPO Countries/SMEs/ Popular PRIZE and Lifetime Achievement. The winners of these prizes are as follows: 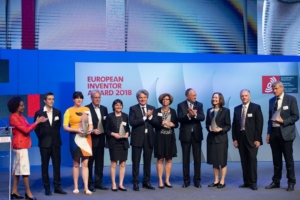