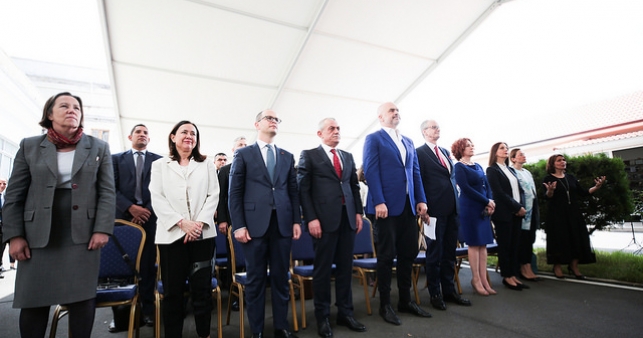 The Ministry for Europe and Foreign Affairs organized the activity “ Albanian Cultural Heritage – a value on the European path. Cultural journey in the past towards the common future ” . This event was attended by the Speaker of the Parliament, Gramoz Ruci, the Albanian Prime Minister Edi Rama, the Director General for European Neighborhood Policy and Enlargement at the European Commission, Christian Danielsson, ambassadors, representatives of religious communities and representatives of cultural institutions in the country.

Prime Minister Rama in his speech referred to the great Renaissance Naim Frasheri and his significant verse “O blossom born of the gods”, a line that according to the Prime Minister embodies the entire history of the centuries-long struggle of Albanians to be part of the world which they saw with the eyes of their imagination or sought to overcome the sea. “The expression that Albanians used whenever they left the house was: getting the road to Europe, this expression summed up the dream, hope, and ambition of every man, father, boy who left his back on the road to Europe to bring it back what the house could not have stood and detached from there, “underlined the head of government. Prime Minister Rama also focused on the important reforms that the country has undertaken on the road to European integration, which, he continued,

Minister for Europe and Foreign Affairs, Ditmir Bushati, in his speech focused on cultural heritage as a starting point for our European journey. Referring to the exhibition of photographs from the country’s past, part of the archive fund of the Marubi Museum, the archive of the MEPJ archive, Bushati said that these are all indicative of our efforts for statehood and state-building.

The head of Albanian diplomacy assessed that Albania has regained its path towards Europe again. Minister Bushati brought to attention the fact that our connection with Europe is long-awaited, where during our 15th century, our predecessors from witnesses turned into protagonists of European history, playing an irreplaceable role for the protection of Christianity and European values. “Political alliances of Gjergj Kastrioti with the European powers of the time were the sparks of the deeply European spirit of the Albanians at that time”, or the extraordinary contribution “where remarkable punishments such as Barleti, Buzuku, Budi, Bogdani, Bardhi and later a golden constellation Albanian intelligentsia such as De Rada, Naim Frasheri, Mjeda, Asdreni, Fishta and many others,

Bushati described the European project as unfinished as an organic part of it, like the Western Balkans, is still out. However, he praised this moment as a historic threshold, that of beginning negotiations for EU membership.

Minister Bushati said the past, however glorious, was not a justification for the present and we should deserve it.

Culture Minister Mirela Kumbaro stressed that “Albania, besides being blessed with natural beauty, carries a centuries-old culture of civilization, which should be promoted as the most intelligent way to contribute to the EU cultural mosaic.

While Commissioner Christian Danielsson expressed his happiness in participating in the activity of Albanian Cultural Heritage – as a contribution to the European path of Albania. He stressed that Albania has an astonishing and rich heritage in culture as an important asset in support of tourism and economic growth.