Finance and Economy Minister Anila Denaj is conducting an official visit to Saudi Arabia of economic character. A very important meeting was evaluated with the Minister of Finance, Mohammed bin Abdullah Al-Jadaan, where they discussed aspects of financial and economic cooperation between the two countries, and discussed a number of issues of common interest and the means to strengthen them.

During this meeting, the agreement on the elimination of double taxation was signed, which means more cooperation between the business community and the promotion of foreign investment.

In order to create a favorable climate for foreign business, the Albanian government implements double taxation arrangements with 41 different countries.

The double taxation abolition agreement with Saudi Arabia is expected to boost cooperation between the two countries in different areas of the economy as well as increase trade exchanges.

Minister Denaj is part of the government delegation that is holding a two-day official visit to Saudi Arabia. 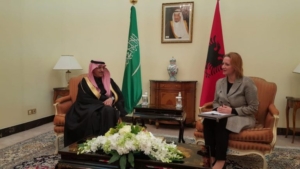