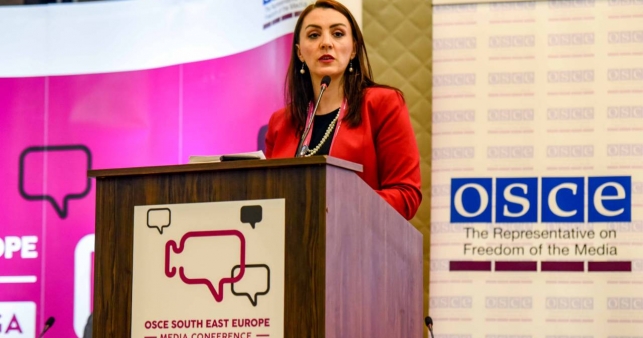 On 10-11 May in Struga, RFOM / OSCE, held a high-level media freedom conference in South East Europe. The invited were senior officials of the Ministries of Foreign Affairs of the countries of the region. The delegation of Albania was chaired by the Deputy Minister for Europe and Foreign Affairs, Artemis Dralo. This conference was attended by state officials in the field of media, journalists and other personalities in the field of communication, representatives of civil society, etc. 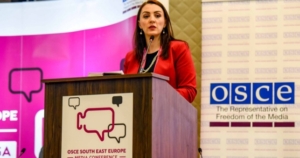 The conference discussed issues related to freedom of expression and fundamental media values ​​in a democratic society as well as exchanging experience and best practices for exercising this freedom, protecting journalists and strengthening professional ethics in the media.

The panelists of this conference provided an overview of media monitoring and development in the region, as well as how OSCE provides its contribution to strengthening the independence and freedom of media in the member countries of the organization.

Deputy Minister Dralo in her speech praised the cooperation of regional countries with the OSCE and the Office of the Representative for Freedom of the Media in this organization for their contribution in preserving and strengthening the freedom of thought and the role of independent media in a democratic society. She noted the inclusive engagement of the Albanian Government in improving the legal framework and as a country that guarantees freedom of expression as well as the work that is done to achieve the highest standards.

Referring to the European Commission’s assessment in this April report on media freedom, where Albania was singled out for the steps it has taken, the Deputy Minister assessed that there is still to be done in this regard both by politics and the business involved in the field media, but also journalists themselves, for the highest levels and standards of journalism in the country, in the service of deepening democratization processes. Concluding her speech, she said that Albania strongly supports the OSCE’s Media Freedom Representative’s policies, freedom of expression, pluralism in the media and the digital era, security of journalists and the fight against impunity as well as the fight against violent extremism leading to radicalism.

Further on, the conference held several panels dealing with some sensitive issues in the field of journalism, in order to strengthen media freedom, where present were also referents, well-known media specialists and journalists from Albania.
News Source: Ministry For Europe and Foreign Affairs