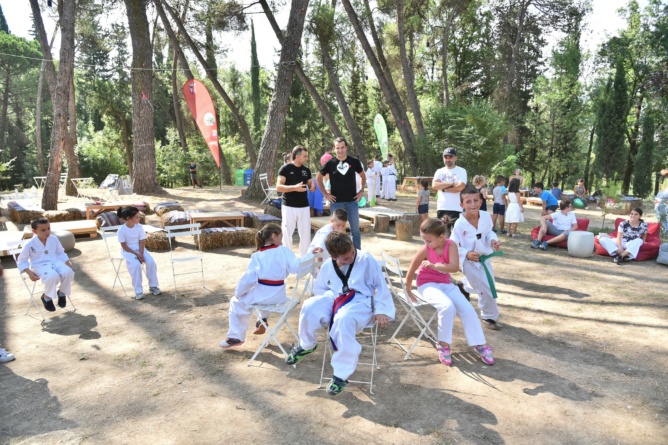 These cool August days, the Artificial Lake Park has turned into a large summer camp for children, who participate every day in various sports, educational, and cultural activities. The summer camp is set up by the Municipality of Tirana, Mobike Albania, Telekom Albania and the association “The subject” and is mainly frequented by children from social centers, families with economic assistance and Roma and Egyptian communities.

The head of the Municipality of Tirana, Erion Veliaj, joined the participating children and said the summer camp has become a tradition. “These two months have created a very beautiful tradition with the camp. Not all children have the opportunity to go to the beach or have a break, so we brought them here in the middle of Tirana, “Veliaj said. In the summer camp he also met an early friend, Elidon, the Roma son five years ago, when he had just taken the post of Minister of Social Welfare and Youth and escorted him to the hospital to treat his leg. Now Elidoni has grown up and has started school. 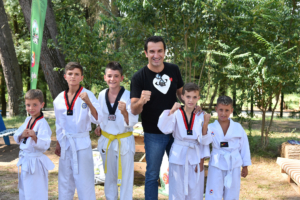 “I am very happy that for the first time in these camps we have approached many children from the Roma community. I’m glad we included children from social centers, which were not supposed to have summer vacations or camping, and even a few years ago were in a street situation, and today they have not only sheltered but many other colleagues, social workers , are doing a wonderful job of transforming reality in these areas of Tirana “, underlined the head of the Municipality.

Veliaj delivered the good news that this September the reconstructed 9-year school “Kosovo” will be ready to welcome Unit 2 children in the capital, thus bringing about the elimination of two-shift lessons for other educational institutions of this unit. “We will do some fantastic things for kids this year. First, “Kosova” school will be opened in Unit 2, a new fantastic school. For all children of Unit 2, Sauk area, Str. Elbasani “, Labinoti School and Lyceum, where due to the absence of a new school were taught in two tours, will be passed on a turn because the opening of” Kosova “School, now not 4 years, but 9 year old will accommodate many children, “he said, adding that special attention was paid to encouraging young people to deal with sports activities by opening 62 gyms.

“We have opened 62 gyms in Tirana. When I start school I want to go to school even after learning. It is important to learn to play in the team, to respect one another, to learn that we ourselves, without each other, can not do the great things we dream and above all realize that when we win, we must win by very humble, and we must give our opponent the hand. Well, we have to learn how to lose. Sometimes, when you look at the big politicians, etc. in Albania, when they win as they have won and offend others; when they lose the big tragedy, they say, “The whole world burns, that we are lost”. Therefore, it is very important to learn how to win and lose, “said Veliaj.

The establishment of summer camps for children from families in need has now become a tradition for the Municipality of Tirana, which gives all the children an opportunity. Children have the opportunity to get acquainted with the world of Mobike bicycles, which are located near the camp to pedal on the new bicycle paths in the Park. In the afternoon hours, the relay takes activities for young people with live music, DJs, string art etc.