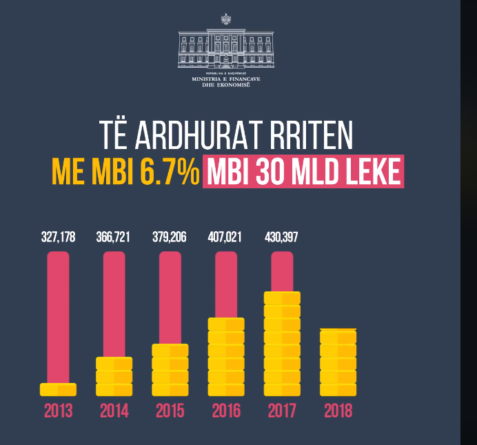 Minister of Finance and Economy, Arben Ahmetaj said that the 2019 budget enables growth of the country’s economy in all categories, with direct impact on citizenship, from wage increases to withdrawal of VAT for agricultural inputs.

In 2019, fundraising for wage earners will increase by 9.1% compared to 2018, according to the head of finance, while stressing that 438 educators will be employed more than in 2018 in 32 municipalities.

In the defense sector there are 6,800 active soldiers benefiting from a growth of 10% to 19%. While over 177 million ALL will finance wage increases in the penitentiary system. 3,559 prison officers receive an average salary increase of 7% and over 120 million leks to increase salaries of diplomats. Approximately 308 employees of diplomatic missions receive an average salary increase of 20%, Ahmetaj informs, while pointing out that government policies address all citizens’ attention.

Following the approval of the State Budget of Albania for 2019, Minister Ahmetaj said, “Proud of a budget that next year will enable the further reduction of public debt and the continuation of fiscal consolidation; investments in large public works in favor of citizens, for improving infrastructure, but also in education and health; as well as increasing the economic impact for all categories, from wage increases to VAT deduction for agricultural inputs. “

Acknowledgment to the SP Parliamentary Group for the 2019 Budget Approval and the Fiscal Package accompanying it, Ahmetaj emphasizes.