Participants in this conference were historians, academics, numismatists, local and foreign archaeologists, monetary and economic history researchers, to present and discuss the findings of their studies. 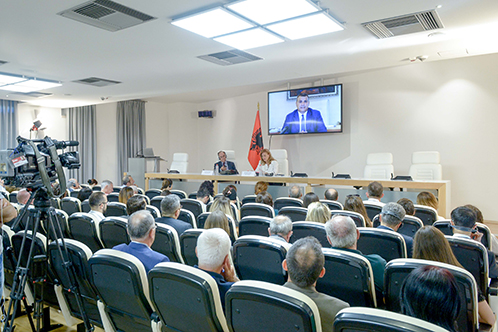 At the head of his speech, Governor Sejko thanked the participants, stressing that this conference is one of the most important developments of this Museum. The Governor added that the Bank’s Museum helps to enrich and continue studying the collections exhibited therein but also serves local researchers as a platform for their research work.

Further, the Governor continued that the Bank of Albania, as an institution that maintains and promotes an important part of the country’s cultural heritage, such as currency, feels the privilege and obligation to work and cooperate that the Bank’s Museum is not just a collection of exhibits rare, but a place where the public finds the necessary literature and expertise to recognize economic and monetary history and to get the financial education so necessary for our country.

In conclusion, the Governor said that these important moments for Albania’s economic and monetary history and beyond will be the subject of discussion at today’s conference.

First Deputy Governor of the Bank of Albania, Elisabeta Gjoni, held the opening speech of the conference, underlining that this activity complements the rich collection of the Museum with the historical context and the country that has cut these coins, contributes to the historical and educational role of the Museum. She added that this meeting represents a very good opportunity to exchange experiences with representatives of the main cultural institutions in the country, museums of homologue banks and foreign institutions of the field.

Deputy Governor John said that this year’s conference of the Bank of Albania’s Museum addresses the mutual, complicated and multidimensional relationship between money and war. Wars have influenced the economy and the development of humanity since the dawn of civilization to this day.

In conclusion, Mrs. John explained that this conference aims to show how the radical changes that wars have brought to political systems and alliances or divisions among states have also affected monetary developments. “History tells us that periods of conflict or wars are particularly related to radical changes in monetary systems and policies,” concluded Deputy Governor John.

A special guest at this conference was Prof. Olivier Picard, former Director of the French Archaeological School in Athens, Professor at the Sorbonne University, Member of the Académie des Inscriptions et Belles-Lettres (Institute of France), which addressed the topic of special interest to our country “Production of Illyrian coins in wartime periods “.