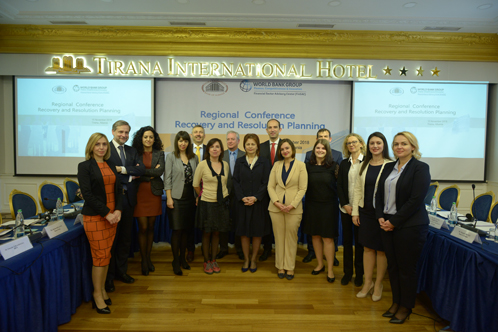 On November 15, 2018, the Bank of Albania, in cooperation with the World Bank’s Financial Sector Advisory Center, organized a Regional Conference on “Planning of Recovery and Emergency Intervention”.

Conceived in four sessions, the proceedings of the conference were opened with the greeting speech of the Second Deputy Governor of the Bank of Albania, Natasha Ahmetaj.

During her speech, Deputy Governor Ahmetaj made a statement of the difficulties encountered during the global financial crisis period 2008-2011, by the governments of different countries, which were forced to use public funds by injecting money and issuing guarantees to financial institutions in trouble.

She added that, at that time, this situation served as a reflection on the appropriateness of regulating financial markets in facing crisis and highlighted two significant shortfalls in the regulatory framework. “First, banking legislation set clear rules for market entry into the market of new participants, but did not set out the mandatory requirements for getting out of the market of problem participants. Secondly, the high level of financial integration caused domestic shocks to be transmitted across borders to other countries, turning into a global problem, “he said. Ahmetaj.

Deputy Governor Ahmetaj added that the analysis that followed the financial crisis motivated the European Union to consider issues of recovery and emergency intervention in banks and currently the Banking Union in Europe has introduced harmonized rules for emergency intervention through the activation of the European Directive on Recovery and Intervention extraordinary for all member states, and has established the Unified Interim Mechanism in the Eurozone.

Further, the Deputy Governor underlined that the model of global integration is the economic model that has followed most of the transition countries, such as Albania. In this regard, the Albanian banking market, Ahmetaj, has demonstrated clear wills and objectives for a swift integration with the legal framework of the European Union banking system, as well as the important changes it has undergone since 2008.

Subsequently, Deputy Governor Ahmetaj emphasized that although in the history of the Albanian banking sector there were no bankruptcy cases of banks, during the construction of hypothetical scenarios for facing a potential exposure of the Albanian economy to the Greek sovereign debt crisis, gaps in our banking legislation . For this reason, during 2015, with the support of the World Bank FinSac project, the Bank of Albania started the difficult but necessary work of harmonizing the European Directive into a new Albanian law.

The Law “On Emergency Recovery and Intervention in Banks in the Republic of Albania” entered into force in July 2017, charging the Bank of Albania with the new mandate of the Emergency Intervention Authority in banks, which fulfilled the full financial security mechanism for the banking sector, with the Bank of Albania responsible for regulation and supervision of the banking sector, drafting macro-prudential policies, performing the function of the last lender, and implementing extraordinary intervention.

Thanks to the participants, she expressed the conviction that the works of this conference will serve the exchange of experiences and will allow the construction of a new bridge to co-ordinate the actors’ efforts for a sustainable financial system within and beyond the geographic boundaries.