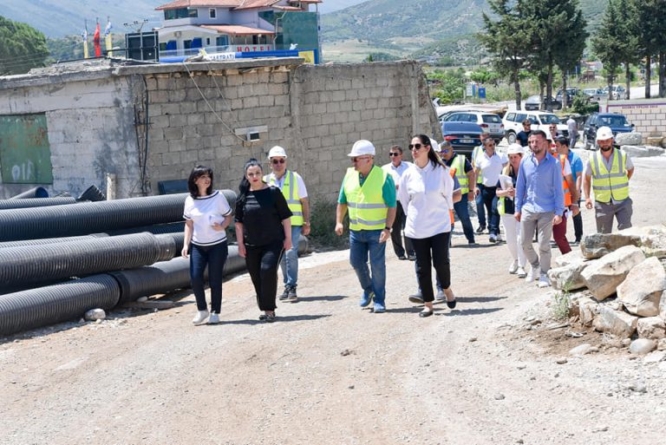 The work for the Tepelena bypass is proceeding according to the chart provided to enable this important work to be completed before the deadline foreseen in the contract. Throughout its length is being worked out while taking measures to ensure both the river defense and the slope along the castle.

The Minister of Infrastructure and Energy, Belinda Balluku, along with the Director of the Albanian Road Authority, Sonila Qato, and the MPs of the Socialist Party, Gjirokastra County, closely followed the works where they were acquainted with their performance.

Representatives of the company, which is carrying out the works, explained that a large number of pilots were set up to ensure the protection of the rock of the castle and the seventh of the river, as well as other interventions expected to be realized in order to provide a quality work and standards for citizens.

“It is foreseen a segment of about 2.1 kilometers all that will be made with all standards, with two lane crossings, with pavement. Flood protection is envisaged, which at 99 percent was completed by placing water-insignificant pilots and curtains to secure the entire slope after we had problems of corrosion by the river. All the sword of the castle will fill all the cavities where there is erosion corrosion, will be filled with concrete and stones and then the nets will be laid to solve this problem once the fort has been threatened in terms of the stability of the slope “, declared engineering firm of the contractor.

The Director of ARA, Sonila Qato, said that due to the heavy traffic that this axis has during the tourist season, precautions will be taken to facilitate the movement of vehicle drivers.

“We are taking provisional measures to ensure that the axis of the tourist season is free and that it will not create any concerns about the traffic and the burden that will be the way to connect with the south of the country,” said Qato.

Appreciating this segment as overly important after connecting the Levan-Tepelena highway with that of Tepelena-Kakavija, Minister Belinda Balluku, emphasized the commitment to finish this work ahead of the deadline stipulated in the contract, despite the fact that it is a complex work high.

“The new strategy to offset all the losses of time in the past is to submit offenses before the deadline. This is something we are doing in the last six months and we want to continue at the same pace. We know the complexity, certainly the safety during the works and the quality that remains at the end of the project are very important to us, however we have a great desire to hand over all the works even shortly before the deadline, “Balluku underlined .

To date, more than 300 pilots have been set, excluding river protection, while the construction of sidewalks is projected along the part of the castle.