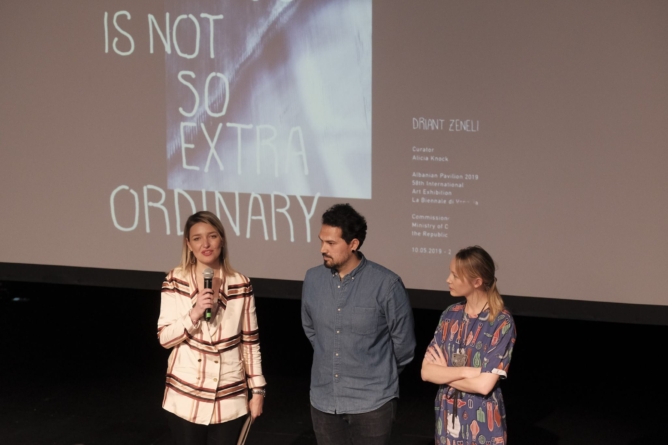 At the arTurbine premises, the Ministry of Culture presented the representative project at the 58th Venice International Art Exhibition, with the participation of Culture Minister Elva Margariti, artist Driant Zeneli, curator Alicia Knock, in an open presentation to the public and journalists.

The Albanian Pavilion at the Venice Biennale belongs to Driant Zeneli with the title: Maybe the Cosmos is not so extraordinary. This year the pavilion stands open on May 11 – November 24, 2019. “Maybe the cosmos is not so extraordinary,” a project by artist Driant Zeneli, curated by Alicia Knock. How do we push our physical and mental boundaries without becoming superheroes? Can coexist and potential / reality and imagination coexist?

“Unknowingly, Driant leads us to utopia and dream through the concept, while I would like to return years ago, when this government, led by Prime Minister Rama, pledged that Albania participate regularly in important international art events culture like the Venice Biennale, and not in a fragmented way as before 2013 “- said Minister Margariti.

Driant Zeneli has implemented a project that includes two short films, one for Elbasan Metalurgical and one for children who continue to work in Bulqiza.

Along with the two reportages at the Venice Biennale, Drianti will also present some of the work, from the sketches created to the pictures from the work for the realization of the project.

“I am very interested in all social and political aspects, but if I did a second and third reportage I would seem to say nothing, it would be image consumption for the passive audience, so my desire is to create a parallel narrative, playing between reality and fiction.

While curator Alicia Knock said Drianti builds triology. “The idea of ​​how the local thing becomes global. It’s nice to work with a project with this title and go back to a time that Albania could not see a few things and it was closed. “

In essence Driant Zeneli’s research lies in redefining the failure, utopia and dream. Through film narrative and performance, Driant Zeneli challenges the persevering effort of the people to their borders, exposing the possible responses to the fragility of human beings and the planet Earth. He challenges the physical and metaphysical relationship between man and space, matter and dream, gravity, and control. Maybe the cosmos is not so extraordinary (2019) is a sculptural video installation based on a multidisciplinary project called Beneath a surface, there is just another surface, which began in 2015 in the Metallurgical, a Dystopian industrial complex in the city of Elbasan in Albania. The project and its title derive from the fanatistic-scientific novel “Towards Epsilon of Eridan” (1983) written by the Albanian physicist and writer Arion Hysenbegas. The installation is conducted by a two-channel film, whose events take place in the Bulqiza mines, a northeastern town of the country where, since 1918, chromium ore has been extracted.