In the last four years, no new major electric power generating facility is added to the electric grid of Albania. Meanwhile the whole domestic production of electric energy is based on hydropower, which is highly dependable on rainfalls. In the first quarter of 2018, for example, the domestic production of electric energy reached the record high of 3.2 GWh, whereas in the third quarter of 2017, it reached the record low of 0.4 GWh.

In average, the value of electric power production comprises 20% of Albania’s GDP. As such, fluctuations in production – from quarter to quarter and from year to year – have significant impact on GDP growth. And this impact has nothing to do with the economic or political conditions of the country – at least in short term, they depend only on the whims of Mother Nature…

Given this dependence of GDP growth on the highly uncontrollable electric power production, it is necessary to analyze it excluding the impact of the latter (i.e. assuming it remains constant). Such an analysis can point to the GDP growth related only to controllable factors, like government policies, macro stability, investor and consumer optimism etc.

As it can be seen in the Figure 1, in some quarters, electric energy production has dragged down the GDP growth (when rainfalls have been low) and in some quarters it has boosted it (when rainfalls have been high). The most notable has been the first quarter of 2018, when GDP’s year-on-year real growth was almost 4.5%. If the impact of electric energy production is excluded, the GDP growth would be only 2.4%.

Since electric energy production starts falling rapidly after March, the slow GDP growth of only 2.4% in the first quarter may spell trouble for the subsequent quarters. If the rest of the Albanian economy does not pick up steam until the end of the year, the Government’s objective of 4% GDP growth for year 2018 could be in jeopardy. 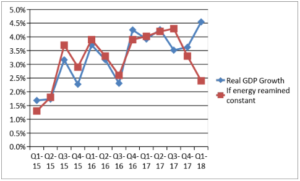