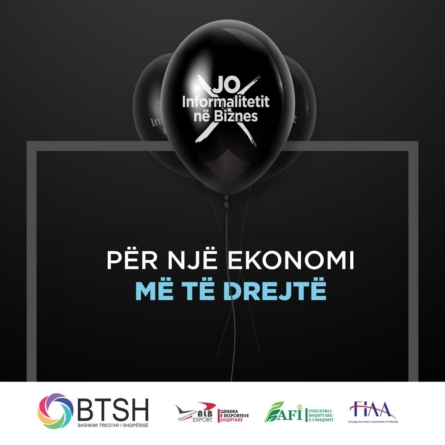 The Foreign Investors Association of Albania (FIAA) in cooperation with the Albanian Association of Trade (BTSH) will organize on October 12th, 2017 an Awareness Campaign that will culminate with a peaceful Business Marching under the motto “For a more Formal and Fair Economy”.

Through this Action of entrepreneurship, business associations intend to sensitize the general public on the need of saying NO to Informality and INCENTIVATE the formalization of the economy through legal changes that should be included in the Fiscal Package 2018.

This call is addressed to all decision-making institutions, policy-makers, citizens as products’ consumers and services of various industries, as well as foreign diplomatic media bodies in the country. We believe that no business can develop sustainably in an informal economy and no campaign against informality can be successful in the long run without substantial legal changes that business addresses.

The participants will march peacefully along “Dëshmorët e Kombit” Boulevard (starting point at the Pyramid) towards the courtyard of the Congress Palace, where there will be Speeches held on a special stage set up for this activity. Business representatives in the country (whoever is interested), and  Prof. of Economic Sciences, Mr. Adrian CIVICI (Guest) will speak at this event.