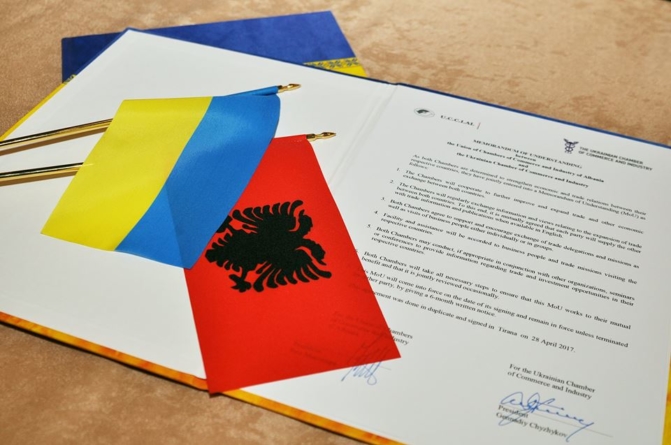 The first ever economic forum Albania-Ukraine was held in Tirana on April 28, 2017. Albanian Export Center, in cooperation with the Albanian Investment Development Agency, Chamber of Commerce and Industry of Tirana, Union of Chambers of Commerce, organized the forum which was deemed by all the participants as the best start of this bilateral cooperation that will continue with Free Trade Agreements between the two countries.

Secretary of State at the Ministry of Economy of Ukraine – Alexey Perevezentsev, ex-AIDA’s Executive Director – Genti Beqiri, President of “Albanian Export Center” – Mr. AlbanZusi, President of the Chamber of Commerce and Industry of Ukraine – Gennadiy Chyzhykov, as well as other representatives from the Albanian trade and industry chambers and business associations were present in this event. Ex-AIDA’s Executive Director, Genti Beqiri made a brief presentation on the favorable climate and opportunities to invest in Albania, as well as the support that the Agency provides to Albanian Albania-Ukraine Economic Forum, the Best Start of Bilateral Cooperation 92 October 2016 businesses and exporters. “Exports to Ukraine have rised over 30 percent in
the last two years, which is a very positive figure. We have some offers to participate in some joint fairs and intensifying information exchanges through Enterprise Europe Network, ” said Mr. Beqiri. According to him, there are all the possibilities for further increase of trade exchanges between the two countries, and for Ukrainian investments in our country in form of partnerships with Albanian companies, mainly in the food industry. During the forum, there were signed two Memorandums of Cooperation between the Chambers of Commerce, whose representatives expressed their conviction and willingness to continue this cooperation with other joint events between the two countries in order to strengthen economic cooperation and promoting exports of “MADE IN ALBANIA” products, which are missing in the Ukrainian market. The forum continued with B2B meetings between companies of the two countries present in this event

FOLLOW BUSINESS ALBANIA was a Media partner of the event. 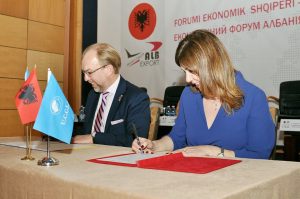 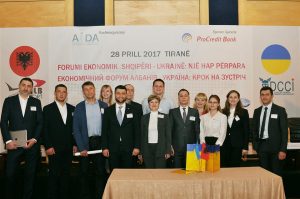