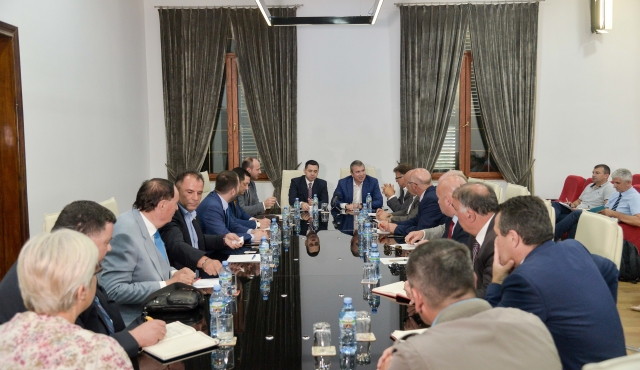 In the framework of stakeholder consultation before restoring the transit tariff to Milot-Morinë, Minister of Finance and Economy Arben Ahmetaj, together with the Ministry of Infrastructure and Energy, Damian Gjiknuri received in a meeting a business representation from the Kosovo Chamber of Commerce.

During this meeting was emphasized the great importance that the Milot-Morinë road, known as the Nation’s Road, has for the economic development of our two countries and the increase of trade exchanges. The parties agreed on the standpoints for the emergency need that this road has for professional and continuous maintenance as well as for the application of the transit tariff system as a guarantee for this maintenance.

“We agree that a fee should. The problem is how to soften and mitigate this fee. Everything that sits here is still paid by Albanian citizens and we have to understand that, so the State Budget. As this concern arisen, a study has been carried out and the cost of maintenance has been deducted and therefore we were forced to go to concessionary practices. The road will cost at least 7m euros a year for maintenance and will come up with this amount; or will pay all Albanians or road users and that is the truth. There are hidden costs, “said Minister Gjiknuri.

The Minister of Infrastructure said the government is negotiating not only to address the problems of the Kukes local population as an internal problem but also to address the general needs of businesses, whether they are in Albania or in Kosovo.

“We intend that for those who are frequent travelers we have a discount and the subtraction is being negotiated. We will not discriminate against businesses. If an exception is made to Kukes citizens, these are known and are practices in relation to local communities due to the lack of alternative pathways. There will be no unfair competition because of the increased transport costs and business will be the same practice for both Albanian Albanians and Kosovo Albanians. So, we have this principle, because then such disbalances would be created, “Gjiknuri said.

Ministers Ahmetaj and Gjiknuri listened attentively to the concerns raised by Kosovo business representatives regarding the tariff level and its effects on their transport costs. They agreed to jointly make the utmost efforts to find the facilitating forms for business tools that move most frequently in the Milot-Morine axis. The business representatives also voiced the idea that the Kosovo government can also contribute to ease the financial burden created by tariff reductions and the need for road maintenance. Also, business representatives proposed to ministers Ahmetaj and Gjiknuri that the resumption of the implementation of the crossing tariff could be shifted over time after the next tourist season.

“Certainly there is an awareness, at least a year and a half for what the road fare would be. There is also no discussion of the balance between the cost of the road and a new culture, if we have to say so, but the cost that the citizens and businesses would be charged was also present. We are focused on contract basis with frequent users. We have built with the Minister a financial logic of progressiveness, to give an opportunity to those who use the road. So the more you use the way to the truck, let’s say, the more you can lower the price, “Minister Ahmetaj explained.

Further on, he focused on the effect on the Budget of any mitigation interventions in the crossing tariffs on the Milot-Morine road.

“There are almost 48-50 million euros that undertake the State Budget of Albania for the concession period only from these changes we are thinking of doing. Imagine how much more cars, trucks and business cars are, the more the State Budget will pay because in the final is the guarantee it offers through concession concession company. The good news is that you will not pay as much as thought in the first contract. The prime minister has insisted, the minister has insisted, in the final at the back of the state budget comes and we have accepted it. So we are in harmony. The idea is how much the cost we will keep and can bear the cost we say to keep it or not ?! So this is the discussion, “Ahmetaj said.